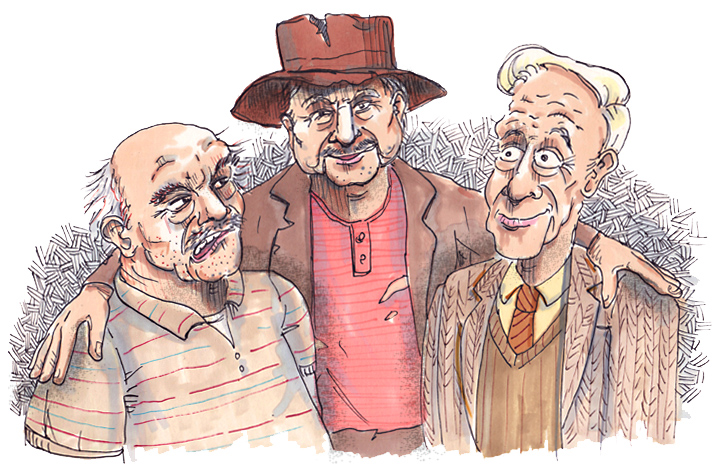 Hollywood is a fickle, fickle place. As presented countless times in this blog, the entertainment business can be cruel, heartless, unrelenting and unforgiving. Beginning way back in the infancy of the motion picture business, hundreds and hundreds of eager young actors and actresses have had their dreams dashed and have been cast aside when the “next big thing” comes along. Sometimes the finger can be pointed at naiveté, drugs or a capricious public, but whatever the reason, a slew of casualties are left in the wake of the elusive quest for fame. However, some are much luckier than others. There are the select few who have managed to maintain two successful careers  one separated by a generation of fans from the other. Such is the case with three particular actors whose on-screen activity spanned many decades and whom each essentially had two careers.

In 1928, 20 year-old Buddy Ebsen, and his younger sister Vilma, arrived in New York City from Orlando Florida, with a little under thirty dollars and aspirations of becoming Broadway dancers. Their popularity in vaudeville led to a contract with MGM where Buddy danced and sang his way through one musical after another, partnering with Shirley Temple, Judy Garland and others along the way. His surreal style of dancing prompted Walt Disney to film Buddy as reference for a dancing Mickey Mouse. Buddy was soon cast as The Scarecrow in 1939’s The Wizard of Oz,  but traded roles with Ray Bolger, who was playing the Tin Man, a move that would prove fateful. After rehearsals and recording the songs, Buddy experienced cramps and shortness of breath from the aluminum dust in the Tin Man makeup. Hospitalization forced him to drop out of the picture. He complained of lung ailments for the rest of his life from “that damned picture”. (Ironically, he outlived his major co-stars by at least 16 years.) His acting career was briefly interrupted by his service during World War II. When he returned to acting after an honorable discharge, he appeared almost exclusively in Westerns. One notable exception was his turn as Audrey Hepburn’s estranged husband Doc Golightly in 1961’s Breakfast at Tiffany’s.  That role caught the attention of a CBS casting director. Buddy was recruited for the role that would define his second career   Jed Clampett, the patriarch of The Beverly Hillbillies, the wildly popular show that ran for nine seasons. After Hillbillies  cancellation, Buddy starred in, what could be labeled as “career number three”, the detective series Barnaby Jones, for eight seasons. He made guest appearances in movies and TV until his retirement. Buddy passed away in 2003 at the age of 95. The majority of his Hillbillies fans were not aware of his roots as a movie musical hoofer.

Leslie Nielsen started out as a disc jockey, but his uncle actor Jean Hersholt inspired his interest in acting. He began what would become a long career in television and motion pictures, primarily as a dramatic actor. He starred in the science-fiction classic Forbidden Planet  in 1956. He auditioned for the part of Messala in Ben-Hur,  but lost to Stephen Boyd. Undiscouraged, he followed that with roles in many Westerns and romantic comedies. He was part of the all-star cast of  the 1972 disaster film The Poseidon Adventure  as the doomed ship’s captain. In 1980, he began what became his “second career” as a slapstick film comedian when he played the deadpan  Dr. Rumack in Airplane!   Cast alongside other well-known serious actors parodying their regular on-screen personas, Leslie delivered the often -quoted answer to “Surely, you can’t be serious” as “I am serious and don’t call me ‘Shirley'”. Film critic Roger Ebert called Leslie “The Olivier of spoofs”. Leslie went on to star in a  succession  of raucous send-ups including Spy Hard  and the popular Naked Gun  series. He starred in nearly a dozen more genre parody films until his death in 2010 at age 84. His biggest comedy fans were not aware of his early days as a serious actor.

Len Lesser was cast in small but key roles opposite Clint Eastwood in Kelly’s Heroes  and The Outlaw Josey Wales.  His hulking build made him the ideal villain and he played numerous gangsters, hit men, enforcers and jailers. During the filming of Papillion,  the harrowing prison adventure with Steve McQueen and Dustin Hoffman, McQueen insisted that Len, as the overseer on a prison ship, not hold back in a scene that called for Len to shove the star. “Don’t think of me as a movie star”, said McQueen. Len pushed McQueen so hard, he lost his balance. When an astonshed and intimidated Hoffman’s turn came, he said, “Len, I want  you to think of me as a movie star.” However, Len is best known for his comedic turn as Jerry Seinfeld’s Uncle Leo, with his “Jerry Hello!” greeting. When Len passed away in February 2011, fans knew little of his early motion picture career as a “heavy”.