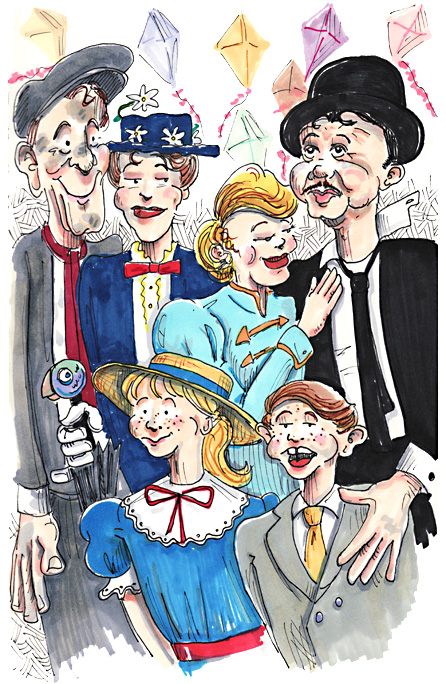 Beginning around 1938, a small Hollywood cartoon producer named Walt Disney did his best to persuade author Pamela Travers to let him turn her series of childrens’ stories into a film. Time after time, Travers rebuffed Disney’s offers. Travers did not believe a film version of her books would do justice to her creation, especially an animated film. Disney’s plans for a live-action movie put off Travers even more, as she perceived him as merely a cartoon maker. Disney was persistent, though, and remained in regular contact with Miss Travers. Finally, after twenty-three years of begging and convincing and cajoling, Travers caved and granted Disney filming rights for her Mary Poppins stories. The agreement contained some caveats, including script approval. Disney was okay with that, but still maintained the final word over the entire project.

With the rights secured, Disney began to set production rolling. He hired the songwriting team of Richard and Robert Sherman to write songs and score the film. The Shermans also helped with the story development and changed the setting from the 1930s to London’s Edwardian era. The Sherman Brothers initially wrote thirty-eight songs, many of them cut during development and others integrated into stronger compositions. Disney cast Broadway actress Julie Andrews, fresh off of being passed over by Jack Warner for Warner Brothers’ film version of  My Fair Lady, for the role that Andrews originated on stage. Dick Van Dyke was cast alongside Andrews’ big-screen debut, as Bert. Bert was a conglomerate of several characters from the Travers’ stories. The multi-talented Van Dyke, while endearing in the part, was reviled for his amateurish, almost distracting, Cockney accent. Veteran British character actors David Tomlinson and Glynis Johns were given the roles of Mr. and Mrs Banks. Young Karen Dotrice and Matthew Garber played Mary Poppins’ charges, Jane and Michael. Van Dyke and Tomlinson also provided the voices for some of the animated characters throughout the film.

After many objections (especially to the animated sequences) and eventual compromises with Travers, Mary Poppins opened to rave reviews in late August 1964. (Travers hated the final project and vowed never to entertain any future offers from Disney.) It went on to become the most popular film of 1965 earning over 28 million dollars. It was nominated for 13 Academy Award and won five, including Best song, Best Score and Best Actress for Julie Andrews, who, incidentally beat Audrey Hepburn who nabbed the role of Eliza Doolittle in My Fair Lady. Mary Poppins launched the careers of Andrews, Van Dyke and the Sherman Brothers into the realms of super-stardom. Tomlinson and Johns were in demand and more popular than ever. Johns still acts and appeared in 1995’s While You Were Sleeping. Tomlison retired in 1979 and passed away in 2000.  Karen Dotrice and Matthew Garber co-starred again for Disney in 1967’s The Gnome-Mobile. Karen appeared in several British television productions until she felt being a full-time mother was a better fit for her. Matthew briefly lived with his parents in India, where he contracted hepatitis and passed away at age 21.

Mary Poppins was the first movie I ever saw in a theater. It was on its initial release in 1964 at the Orleans on Bustleton Avenue in northeast Philadelphia. I still love watching it forty-six years later.