This is my third illustration for the Illustration Friday word “breakfast”.  Here is the first one and here is the second. 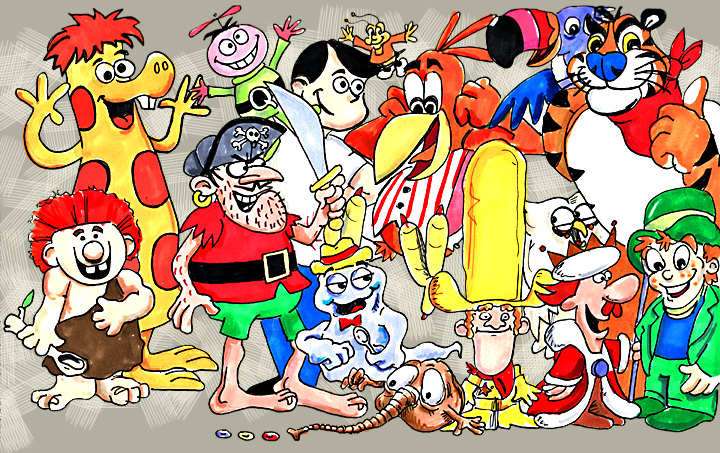 I get a kick out of seeing new parents cautiously checking the ingredient list on cereal. Not wanting to have their children ingest anything that would be harmful or contain empty calories, today’s parents opt for healthful choices for the most important meal of the day. Grocery store shelves are stocked with fruit juice sweetened organic grain-filled packages adorned with happy children enjoying a sunshiny day in a golden meadow. The colorful boxes of star-shaped marshmallows and sugar-coated crunchy morsels have taken a back seat.

When I was a kid, Saturday morning cartoons were regularly interrupted with instructions to “Ask Mom” to buy the latest cereal. Arrays of crazy characters were plastered on the fronts of every box of cereal, all vying for my attention. A good portion of Kellogg’s offerings displayed familiar Hanna Barbera favorites, but there was something compelling about those created specifically for the product. Animals, leprechauns, birds, spacemen, cowboys  they were all there. Sometimes a new character was placed on a lagging brand to invigorate sales. Kellogg’s Cocoa Krispies featured José the Monkey, Coco the Elephant, Ogg the Caveman, another elephant named Tusk, even popular cartoon mountain lion Snagglepuss briefly got in on the cereal-hawking act. Finally Snap, Crackle and Pop stepped in and took the chocolate version under its Rice Krispies umbrella.

Cap’n Crunch, the soft-palate shredding squares of corn, was introduced in 1963. Its popularity spawned a host of spin-off flavors that were part of the Cap’n Crunch family. Each new flavor featured a new character on its box, starting with the Crunch Berry Beast in 1967. Hot on his tail was pirate Jean LaFoote representing for Cinnamon Crunch, Wilma the Winsome White Whale for Vanilla Crunch, Smedley the Elephant for Peanut Butter Crunch (what’s up with these elephants?) and Harry the Hippo on boxes of fruit punch flavored Cap’n Crunch. Things got a bit out of hand when “Chockle the Blob” appeared on Choco Crunch. I didn’t know what Chockle was and I didn’t want to eat what he was selling.

There was also a parade of characters who made brief appearances in the cereal aisle because their namesake products were ill-conceived or just couldn’t compete with breakfast powerhouses like Tony the Tiger or Toucan Sam. One such mascot was Bigg Mixx. Much like the cereal he promoted — an obvious corporate grain snafu at the Kellogg’s production plant — Mixx was an amalgam of several species. One could pick out a buffalo, a moose and a deer in its makeup, but the creature and the cereal were equally frightening and it disappeared from shelves quickly. Other grain-based disasters were Sir Grapefellow and Baron Von Redberry, a pair of single fruit flavored cereal rivals. And the similar Crazy Cow, a boxful of multi-grain pellets coated in drink mix to flavor milk.

Sometimes the story of the cereal characters, as depicted in commercials, was more important than the product itself. Such was the case with Freakies, Grins & Smiles & Giggles & Laughs and the notorious Crispy Critters. Linus the Lionhearted was the cartoon mascot for Crispy Critters, whose show blurred the line between cereal commercial and children’s entertainment. Linus’ adventures were thinly veiled advertisements for Post products and the show was pulled when complaints mounted.

I miss Saturday mornings in front of the TV, plowing through two or three bowls of some brightly-hued, milk-drenched nuggets. I miss the day-glo neon colors of the supermarket cereal aisle. I fondly look back on the difficult decision of choosing a cereal based on its mascot, its shape, its marshmallow content and the “cool factor” of the toy buried deep inside its sugar-frosted depths. Sometimes I think that Cap’n Crunch and his friends are plotting an attack and will one day blow that low-fructose granola shit into the dog food aisle. 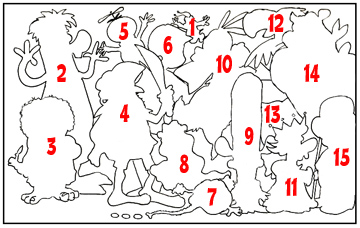