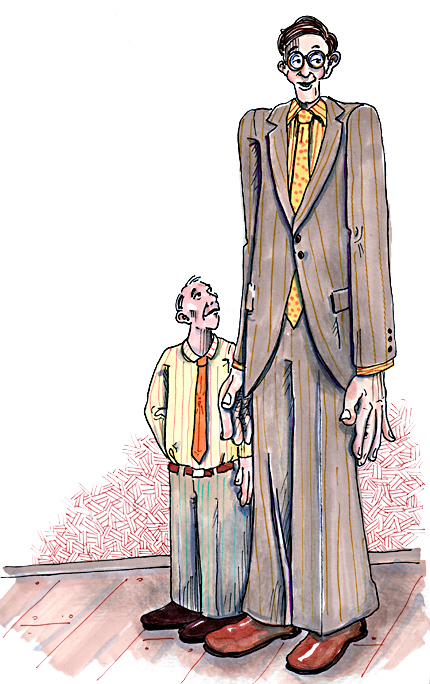 Robert Wadlow was a relatively normal eight pounds six ounces at his birth in 1918, however an overactive pituitary gland would soon change the course of his life.

By eighteen months, Robert weighed sixty-two pounds and by the age of eight, he was 6 feet 2 inches tall. By eighteen, Robert was 8 feet 4 inches tall. His clothes required three times the amount of material as those worn by his peers. He found it difficult to find comfortable shoes and needed them custom-made for one hundred dollars per pair – a huge amount of money in the early part of the twentieth century.

When he turned 20, Robert signed a contract with the International Shoe Company. In exchange for a lifetime of free footwear, Robert would travel the country promoting the company and their products. He, along with his father, visited 41 states and his quiet and friendly demeanor earned him the nickname “The Gentle Giant”.  Robert’s father needed to modify a car, removing the front passenger seat, so Robert could sit in the back seat and stretch out his long legs. Although he required leg braces to walk, and had little feeling in his legs and feet, Robert was always cheerful and delighted to meet so many people.

During a July 4 appearance at a National Forest Festival, an ill-fitting leg brace caused an irritation and subsequent infection on Robert’s leg. He was confined to a hotel bed while doctors worked frantically to lower his fever and treat his ailment. Despite a blood transfusion and emergency surgery, Robert died in his sleep on July 15, 1940 at the age of 22. He had reached a height of 8 feet 11.1 inches.

Approximately 40,000 people attended Robert’s funeral. He was buried in a half-ton coffin that required twelve pallbearers to carry. It was interred in a vault made of solid concrete, as Robert’s family were concerned that his remains would be the target of grave-robbers with exploitative plans. His family also destroyed most of his belongings to deter memorabilia-seeking collectors.

Robert was the tallest person who ever lived and one of only eleven people who ever reached a height of over eight feet. He has been honored and memorialized with life-size statues at Southern Illinois University School of Dental Medicine and six Ripley’s Believe it or Not  Museums throughout the world.