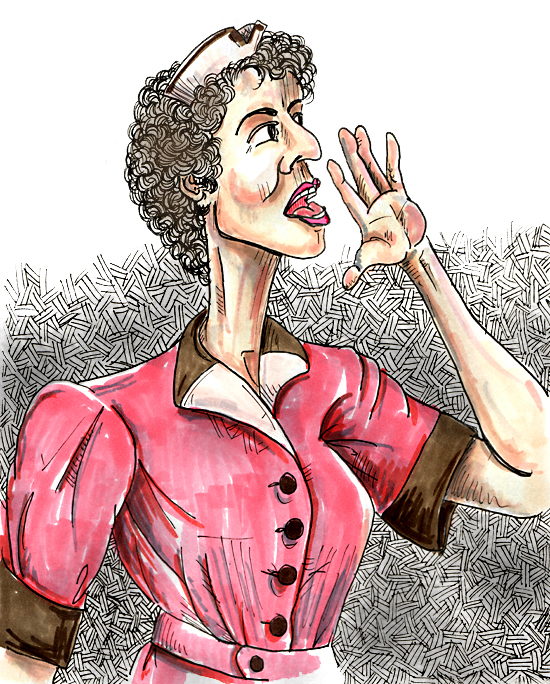 Elvia Allman had a long and productive career and, most likely, you never heard of her.

Elvia made her debut on Bob Hope’s radio show in the late 1930s, portraying the man-crazy character Cobina, a parody of Cobina Wright, a society debutante of the time. Wright sued over the portrayal. The case was settled out of court and she was awarded a reoccuring role on Hope’s show. Also on radio, Elvia was featured as Tootsie Sagwell, Gracie Allen’s best friend on The Burns and Allen Show and as Cora Dithers, the domineering wife of Dagwood Bumstead’s boss on the Blondie program.

Elvia voiced “Miss Cud”, the cow teacher in the 1935 Warner Brothers cartoon “I Haven’t Got A Hat” , featuring one of the earliest appearances of Technicolor at Warners, due to Walt Disney’s exclusive contact with the process. “I Haven’t Got A Hat” was also the debut of lovable stutterer Porky Pig. This performance obviously led to Elvia providing the voice for Disney’s Clarabelle Cow in 28 cartoons. Elvia soon lent her voice to the titular character in 1937’s Tex Avery animated short “Little Red Walking Hood“, in which she did a very convincing Katherine Hepburn imitation.

Elvia made her feature film debut in an uncredited role in Road to Singapore, the first of seven “road pictures” starring Bob Hope and Bing Crosby. She had unbilled guest apperances in multiple situation comedies like I Married Joan, December Bride, Love That Bob, and The Abbott and Costello Show, throughout the 1950s. Her most famous guest role was that of Lucy and Ethel’s stern assembly line supervisor at the candy factory, uttering the line “Speed it up a little”, on a classic episode of I Love Lucy.

In the 1960s, Elvia’s career was at a record pace with 14 appearances as busybody Selma Plout on Petticoat Junction and 13 appeareances as Elverna Bradshaw, essentially the same character, on The Beverly Hillbillies. These were just some of her 58 roles in various sitcoms, like The Munsters, Bewitched, The Addams Family and Hazel. She also had uncredited roles in two feature films, Breakfast at Tiffany’s and The Nutty Professor.

The 1970s saw Elvia’s career slow down considerably, with a stint as Oscar’s mother in one episode of The Odd Couple. Her roles revived briefly in the 80s with two guest shots on Murder She Wrote. In 1990, her career came full circle when she was asked to voice Clarabelle Cow in Disney’s animated take on The Prince and The Pauper. Clarabelle had not made a cartoon appearance in over 50 years.

Elvia died from pneumonia in 1992 at the age of 87, leaving behind a 55-year career of which to be proud.