This week’s challenge word on Illustration Friday is “pioneer”. This is my second illustration for this topic. HERE is the first. 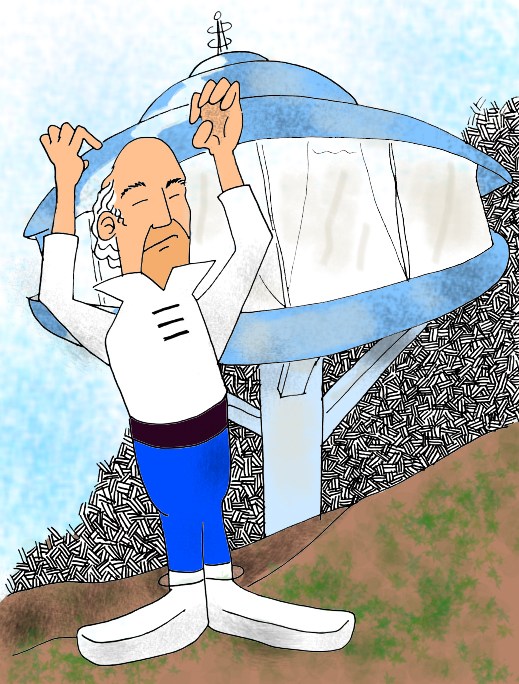 John Lautner was an architect and student of Frank Lloyd Wright. He was a pioneer and the originator of “Googie” architecture. “Googie” architecture was a somewhat derogatory term for the futuristic building design popularized in Southern California in the late 1940s into the 1950s. It was named for Lautner’s design for Googie’s Coffee House in Los Angeles.

Lautner designed many residences and commercial properties in Southern California, each unique, but each featuring the same space-age flair. One of the most famous of Lautner’s creations was the Chemosphere, which is situated on the San Fernando Valley side of the Hollywood Hills, just off of Mulholland Drive. It is a one story octagon with around 2200 square feet of living space. Most distinctively, the house is perched atop a concrete pole nearly thirty feet high. This innovative design was Lautner’s solution to a site that, with a slope of 45 degrees, was thought to be practically unbuildable.

The Chemosphere overlooks the original home of Hanna-Barbera Cartoon Studios. It is believed, although unsubstantiated, that The Chemosphere was the model for the Jetsons’ home, as frustrated animators, seeking inspiration for their new cartoon, glanced out the window at the Hollywood Hills.