This week’s challenge word on the Illustration Friday website is “pioneer”. 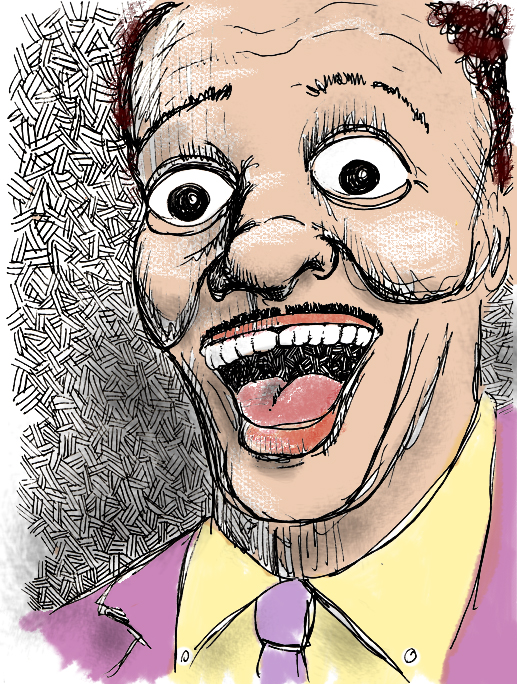 Louis Jordan, a pioneer in jazz, blues and rhythm & blues, was the link between big band swing and rock and roll. He was a prolific songwriter and multi-instrumentalist. He was known as “The King of the Jukebox” and was very popular with both black and white audiences in the days of segregation. Jordan fronted his own band for over twenty years. He was as popular as contemporaries Count Basie and Duke Ellington. His comedic flair was a major part of his popularity. This also helped him as a sought-after star of “race” films in the 1940s.

In the 1940s, Jordan released dozens of hit songs, including the swinging “Saturday Night Fish Fry”, “Blue Light Boogie”, the comic classic “Ain’t Nobody Here but Us Chickens”, the multi-million seller “Choo Choo Ch’Boogie” and his biggest hit “Caldonia”. “Saturday Night Fish Fry” featured a distorted electric guitar and one of the first uses of the term “rocking”. It also included a rapid-fire narration that was evolutionary basis for today’s rap.  Jordan also popularized the slang term “chick”.

Louis Jordan and his band The Tympany Five dominated the 1940s R&B charts. In this period Jordan scored fifty-four Top Ten recordings, eighteen of them rising to number one. To this day, Louis Jordan ranks as the top black recording artist of all time in terms of the total number of weeks at number one – an incredible total of 113 weeks. From July 1946 through May 1947, Jordan scored five consecutive number one songs, holding the top slot for 44 consecutive weeks.

Jordan switched his sound to full-on rock & roll in the mid-1950s, but his popularity waned. He seldom recorded at all after the early 1960s. Jordan died in Los Angeles, California, from a heart attack on February 4, 1975.