This week’s challenge word on the Monday Artday website is “family”. 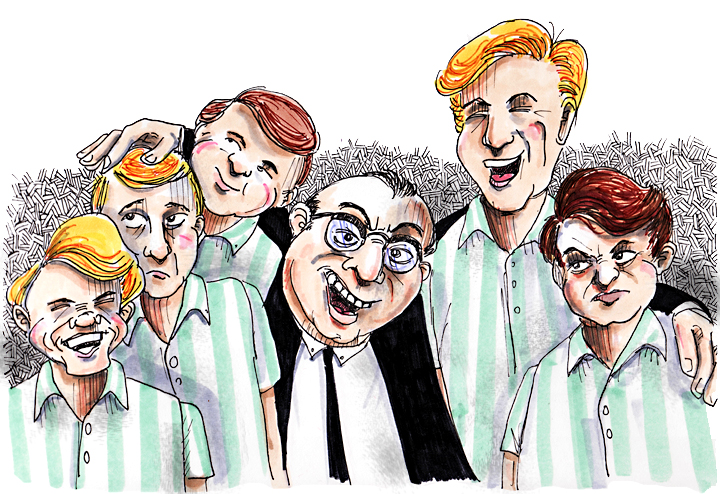 Years before Joseph Jackson was humiliating his kids into pop stardom, there was Murry Wilson.

As a young man, Murry Wilson desperately longed to be a songwriter. He worked at a Goodyear factory and even suffered the loss of an eye in an industrial accident, all while his songwriting aspirations failed. He had minimal success with a novelty dance song, “Two-Step Side-Step”, which was featured on Lawrence Welk’s radio program. Some of Murry’s songs were recorded in the early 1950s by doo-wop group The Hollywood Flames, a band with no hits and little popularity outside of Los Angeles. Murry’s success was very short-lived.

With his musical career at a halt, Murry started a machining business, but maintained an active interest in music. He encouraged his sons, Carl, Dennis and Brian, to learn to sing and play instruments. The Wilson boys, along with their cousin Mike Love and a friend Al Jardine, formed the Beach Boys in 1961. Murry appointed himself their business manager, co-producer, and publisher. He devoted himself to music full-time, producing and managing several other groups in addition to the Beach Boys.

Murry was a domineering and manipulative man and a tough negotiator on behalf of the Beach Boys, earning them a contract with Capitol Records. However, Murry took an active, though sometimes unwanted, role in molding the sound of the Beach Boys. He obsessed and often viciously fought with son Brian, who was now emerging as the creative force of the group. Murry was abusive, condescending and violent in his outbursts. He allegedly whacked Brian in the head with a 2 x 4, causing a loss of hearing. In the studio control booth, Murry would tinker endlessly with knobs and switches, much to Brian’s chagrin. Brian eventually bought a fake mixing board for Murry and placed it in the studio. Murry happily fiddled with it, although it wasn’t plugged into any real equipment. Finally fed up with the constant interference and second-guessing, Brian relieved Murry of his management responsibilities in 1964, after a forty minute tirade by Murry on how Al should properly sing “Help Me Rhonda”. Murry’s rant climaxed with him yelling “I’m a genius, too!” as a reminder to Brian.

In 1969, Murry sold their publishing company, Sea of Tunes, against the groups’ wishes, for a fraction of what it proved to be worth in later years. Brian claimed that his signature was forged by Murry on several related business documents, making the sale illegal. Mike Love claimed later that Murry purposely left his name off the credits for many songs to avoid paying royalties.

Even after the Beach Boys ended their formal business relationship with Murry, he continued to take an active interest in their career, and continued to give them both solicited and unsolicited advice until he died at age 55 from a heart attack.

This monument, located at 3701 W. 119th Street in Hawthorne, California, stands on the site of the Wilson home, which was demolished in the mid-1980s during construction of the Century Freeway.