This week’s illustrationfriday.com challenge is “impatience”. 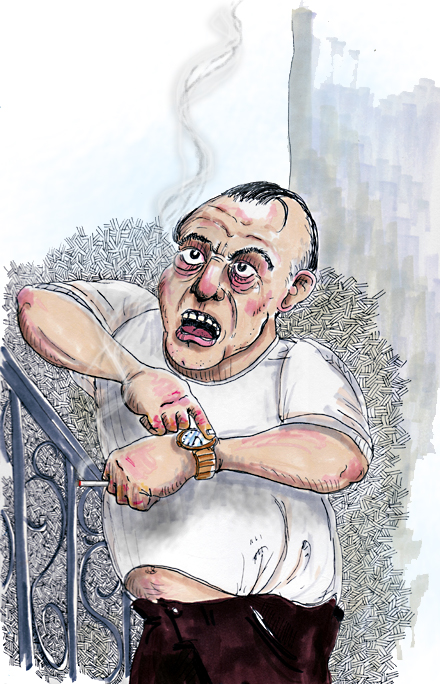 There was nobody that ever lived that was as impatient as my father.

Perhaps it started when he was a child. He and his parents lived at eight different addresses on West 52nd Street in Philadelphia. They kept moving up the block. My father told me it was because each time his father got a salary increase they would move to a bigger house. I think he just didn’t want to wait as long for the mail delivery.

My father never enjoyed a leisurely meal. When I was a kid, dinnertime was a race. My father devoured his daily evening repast in record time. My father would always be served first. As my mother was presenting my brother and me with our prepared platters, my father would be dragging a slice of bread around the rim of his plate, sopping up the last bits of crumbs and gravy. My father would be on his third cigarette, flicking the ashes into his plate, as we remaining three diners were just beginning our dinner. This rushed and impatient gluttony may have stemmed from my father’s military service. In January 1944, my father enlisted in the United States Navy. He was stationed on the battleship USS South Dakota on its second tour in the Pacific. My father’s meals were taken in the ship’s mess hall with hundreds of other sailors. He described the food distribution as an efficient assembly line where your metal tray was piled with meat, potatoes, corn, a scoop of ice cream and a pack of cigarettes thrown on top of it all. The men were given approximately twenty-two minutes to eat before they were to return to their assigned post. My father carried this mindset for accelerated food consumption for the rest of his life, each meal becoming an Olympic event in speed eating. (In addition to biting my fingernails and walking like a duck, I seemed to have inherited this trait from my father, too.)

My father refused to wait in line. For anything. Ever. If we, as a family, went out for a special occasion, my father would pass on any restaurant where he couldn’t get immediate seating. My mom would sometimes be successful in persuading him to give a hostess our name for inclusion on a waiting list for a table, but after one or two minutes, we would invariably leave. We’d walk, silent and embarrassed, to the car as my father grumbled under his breath. We’d drive by several more restaurants in Northeast Philadelphia, seeing patient people patiently waiting for a table, patiently. My father would curse them and we would end up at The Heritage Diner, my father’s favorite eatery  unless there was a line. For years, my family would joke, wondering if our name was ever called for a table at the Open Hearth restaurant at Holme Circle, after we walked out because my father wouldn’t wait.

My father always wore a watch, but I don’t believe he could tell time. If my brother or I had an appointment to go to, my father would begin reminding us five or six hours prior. If it was an early morning appointment, he would wake up early, point to his watch and scream to us upstairs, “Get up! Get up! Don’t you have to be somewhere at 11:30? It’s almost 10 o’clock!” At my father’s anxious alert, we would scramble out of bed, and rush to the shower in a panic, assuming we were going to be late. In our frenzy, we’d catch a glimpse of our bedroom clock showing the time to be 7 AM. My father was not happy seeing anyone asleep. If he was awake, everyone must be awake.

When I was nineteen, I went to Walt Disney World with three of my friends. When  I returned home, I excitedly told my parents about the wonderful time I had. I urged them to visit the theme park themselves. Then I tried to imagine my father being there. He would refuse to wait in line for any ride, attraction, show performance or restaurant. (If you have ever been to a Disney theme park, you will know that the time spent there includes a certain amount of waiting in line.) He would return home, angry and complaining, “I don’t know what the big deal is about that place. We didn’t get to see a goddamn thing! I wasn’t gonna wait in line to ride some goddamn flying elephants!” I reconsidered my urging.

When my father died, my wife took the daunting task of cleaning and emptying his house in preparation for sale. She emptied closets and drawers, packaged clothing for charity contribution and gathered unwanted items for disposal. One day, she opened one of my father’s dresser drawers and discovered dozens and dozens and dozens of unused wallets, some still in department store packaging adorned with price tags. With my father not around to question, we surmised he never wanted to wait in line to buy a new wallet when the time came to replace his current one.