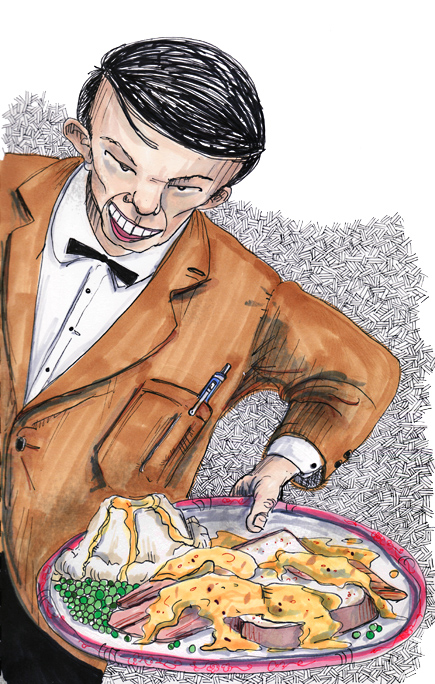 “A Brief History of Josh Pincus is Crying, As Seen Through Chinese Food”

I love Chinese food. I always have. Given a choice of “What’s for dinner?” (and pizza wasn’t available), I’d always pick Chinese food.

My craving for Chinese food began when I was a little kid. Except then, it was Chinese food as I knew it in my little sheltered world. In the late 1960s, my parents’ idea of Chinese food was limited to the offerings of two restaurants in the ethnically diverse Northeast Philadelphia. (By ethnically diverse, I mean Jews and non-Jews.) At that time, Northeast Philadelphia Jews kept these two Chinese restaurants in business. There was Kum Lin and, a short distance away, Kum Tong. They were owned by the same family and their menus each contained identical entries. My parents favored Kum Lin, I suppose, because it was a short driving distance from our house involving very few turns. My father preferred the quickest and least complicated route to any destination. He also had a very low tolerance for waiting in line at restaurants. Kum Lin offered almost immediate seating.

I think always I liked the exotic feel that Chinese restaurants exuded. The atmosphere at Kum Lin, even with its Northeast Philadelphia quaintness, was as mysterious as anything I’d witnessed in my eight year-old life. My family was greeted by the friendly hostess who silently directed us to a table. After carefully perusing the menus, they would order the same thing they always ordered. They requested what they perceived as romantically foreign cuisine. Delicacies they imagined were consumed by Emperor Zhengtong himself in the early reign of the Ming Dynasty. They ordered wonton soup, chicken chow mein and barbecued spare ribs. They were in the lap of Asian luxury. At eight years-old, I didn’t possess the developed palate or the adventurous culinary nature of my Mom and Dad. I sat up proudly and bid the waiter to bring me a hot turkey sandwich – the rarest of all authentic Chinese fare (Kum Lin, to my delight, offered four entrees on their American menu). While my mom munched on the translucent vegetable and chicken-y mixture and my dad gnawed on bony hunks of burnt orange-sauced meat, I savored those slices of white turkey flesh slathered in neon yellow gravy. I imaged that this is what they ate on Thanksgiving in Shanghai.

When I was a little older, my parents ventured out of the Northeast to Philadelphia’s Chinatown. This was a big step for my father, as it required driving more than fifteen minutes and going further south than Cottman Avenue (see previous reference here.) A trip to Philadelphia’s Chinatown was true adventure. Actually, anything outside of Northeast Philadelphia was an adventure. Philadelphia’s Chinatown runs from 8th to 13th and Arch to Vine in center city Philadelphia. Those ten city blocks are clogged with restaurants from almost every Asian culture offering authentically prepared and served food. Some eateries display sauce-smeared duck carcasses in their front windows. Others exhibit tanks of swimming sea-life just moments away from being that evening’s special. Most restaurants are marked by huge red and yellow signs identifying themselves as providing “the best food in Chinatown.” Even while surrounded by endless dinner options, my parents exercised their “devil-may-care” attitude and still ordered wonton soup, chicken chow mein and spare ribs. As restaurants in Chinatown did not offer American dishes, I reluctantly ate wonton soup and a large plate full of fried chow mein noodles covered in sweet duck sauce.

When I got my driver’s license and began dating, I wanted to impress Stefanie Werner. I took her to a small Chinese restaurant, not too far from Kum Lin. I wouldn’t go to Kum Lin in fear I would run into my parents and be embarrassed by their limited Chinese food ordering ability. Acting my role as the big-shot, I was put in my place, as I soon found out that Stefanie was a risk-taker when it came to ordering Chinese food. Her philosophy was “If you can’t pronounce it, order it.” Since I had only ever ordered a Chinese hot turkey sandwich, I was nervous. Stefanie ordered something called “Moo Shu Pork.” When it arrived, she pointed out the small chunks of heart and lung mingling with the vegetables. She deftly rolled a heaping spoonful up into one of the accompanying paper-thin pancakes and popped it into her mouth. She looked across the table at me, expecting me to repeat her action. I gulped, slowly copied her maneuvers and, with eyes tightly clamped, squeamishly took a bite of my assemblage. It was pretty good. A new avenue of eating just opened up and I got pretty courageous in my future Chinese food orders. I even learned to use chopsticks.

For my first date with the future Mrs. Pincus, I took her to Ho Sai Gai, a popular restaurant in Philadelphia’s Chinatown. She had mentioned in our phone conversation that she kept strictly kosher. I had a very lenient (read: non-observant) Jewish upbringing, so “kosher” to me meant complaining like my grandmother. Totally ignoring her dietary restrictions, I took her to this establishment where she was limited to one or two choices from the menu. She settled on plain broccoli over plain rice. I ordered lemon chicken and innocently offered her a trayfe (non-kosher) sample. I was a bit insulted when she refused, behaving as though I offered her a freshly-severed rat head.

My wife spent several years at New York University. When we were dating, she raved about a small restaurant in New York City’s Chinatown called Szechuan Cuisine. She told of their specialty concoction, the likes of which I’d never heard. She described a bowl of cold, cooked vermicelli noodles drenched in thick, dry sesame paste and sprinkled with slivered cucumbers, accented with sesame seeds. “Cold Noodles in Sesame Sauce” was how it was expressed on the menu. Early in our relationship, we trekked to the Big Apple and, while I sat in the car at an expired parking meter, she dashed across Mott Street and returned with a little folded white box of ambrosia  covered in sesame sauce. It was delicious. Sadly, on a subsequent trip, Szechuan Cuisine had closed. The location boarded up.

After I got married, I, too, began to observe the laws of kashrut. To avoid lengthy explanations to uninterested waitstaff, my family and I just announce ourselves as vegetarians. Most Chinese restaurants have plenty of menu selections to accommodate those who wish to avoid meat. With big business becoming aware of more people changing their eating habits to include healthy foods, I was even able to find Chinese vegetable stir-fry at Angels Stadium in Anaheim. Three years ago, I, myself, became a vegetarian. There is a Chinese restaurant in my neighborhood that has an extensive vegetarian menu. Every year they give me a gaudy, gold-embossed calendar decorated with frightening drawings of dragons and fairies. But, the food is good.

My experiences with Chinese food have changed significantly over forty years. My craving for Chinese food has never diminished. Of course, in China, they just call it “food.”