The illustration friday.com challenge word this week is “theater”. 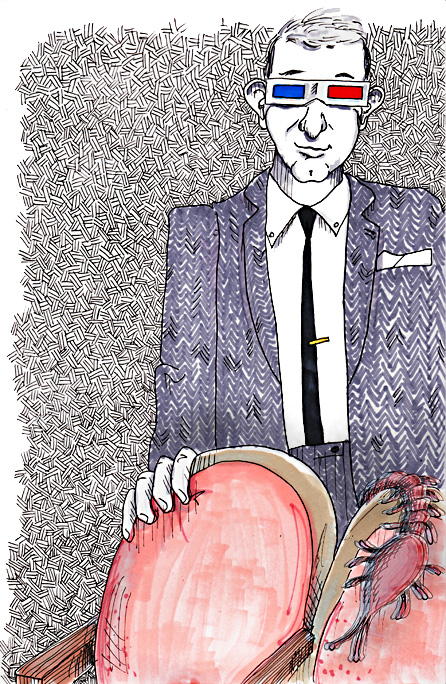 After arriving in Hollywood, William Castle worked as an assistant director with Orson Welles. Castle directed his first film at 29 and went on to make a name for himself as the “King of the Gimmicks”. Always thinking of ways to drum up an audience, Castle introduced in-theater tricks and gadgets with every new movie. To pique his potential audience’s interest, Castle gave the world Macabre in 1958. A $1,000 life insurance policy from Lloyd’s of London was given to each patron in case he/she should die of fright during the film. Showings also had fake nurses stationed in the lobbies and hearses parked outside the theater.

1959’s House on Haunted Hill was touted as being filmed in “Emergo”. Theaters were equipped with a glow in the dark skeleton attached to a wire, which floated over the audience during the final moments of the film to parallel the action on the screen.

The Tingler, also from 1959, was filmed in “Percepto”. Hidden under some theater seats were large versions of joy buzzers. When the titular creature in the film attacked, the buzzers were activated as a voice encouraged the real audience to “Scream – scream for your lives.”

13 Ghosts, filmed in “Illusion-O”, followed in 1960. A ghost viewer/remover with strips of red and blue cellophane was given out to use during certain segments of the film. By looking through either the red or blue cellophane the audience was able to either see or remove the ghosts if they were too frightening.

1961’s Homicidal contained a “Fright break” with a 45 second timer overlaid over the film’s climax as the heroine approached a house harboring a sadistic killer. A voiceover advised the audience of the time remaining in which they could leave the theatre and receive a full refund if they were too frightened to see the remainder of the film. To accompany this film, Castle introduced the ‘Coward’s Corner,’ a yellow cardboard booth, manned by a theater employee in the lobby. When the Fright Break was announced, a frightened audience member could follow yellow footsteps up the aisle, bathed in a yellow light. The patron crossed yellow lines with the stenciled message: ‘Cowards Keep Walking’ and passed a nurse who would offer a blood-pressure test. All the while a recording was blaring, “‘Watch the chicken! Watch him shiver in Coward’s Corner’!”

In 1961, Castle also offered Mr. Sardonicus. The audiences were allowed to vote in a “punishment poll” during the climax of the film – Castle himself appears on screen to explain to the audience their options. Each member of the audience was given a card with a glow in the dark thumb they could hold either up or down to decide if Mr. Sardonicus would be cured or die during the end of the film. No audience ever offered mercy so the alternate ending was never screened.

For the 1962 release Zotz!, each patron was given a gold-colored plastic “Magic” coin which did absolutely nothing.

Strait-Jacket, released in 1964 and starring Joan Crawford, was promoted with cardboard axes being distributed to patrons.

For screenings of 1965’s I Saw What You Did, Castle turned the back rows of theatres into “Shock Sections”. Seat belts were installed to keep patrons from being jolted from their chairs in fright.

Interestingly, Castle produced Roman Polanski’s film Rosemary’s Baby in 1968, with no gimmicks whatsoever. Castle had wanted to direct the film, but the studio insisted on hiring another director due to the reputation Castle had gained through his previous work. They felt that the novel deserved a better treatment than Castle was able to give it.

Castle passed away in 1977 at age 63. No shocks or flying skeletons have been reported at his grave.