The Monday Artday challenge word this week is “spider”. 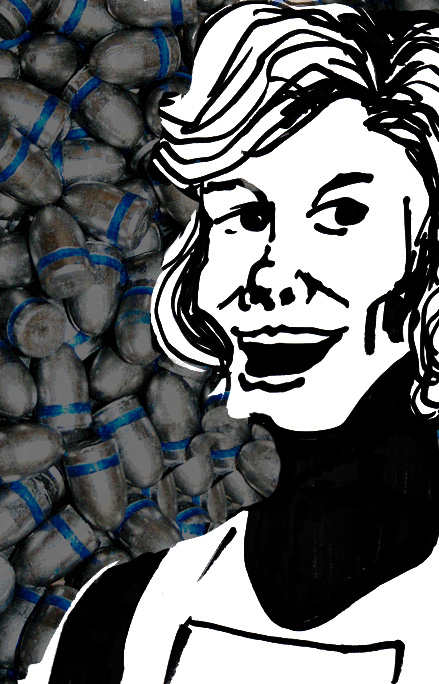 After finishing 5th in the slalom at the 1968 Winter Olympics, charismatic skier Spider Sabich joined the World Cup circuit for several seasons. He turned professional after the 1970 season. Pro ski racing had just completed its first season, and was conducted in a dual slalom format, with racers going head-to-head in elimination heats.

Sabich helped popularize skiing in the U.S. in the late 1960s and early 1970s. He was the inspiration for the 1969 film Downhill Racer, starring Robert Redford. Sabich won the pro championship in 1971 & 1972. Although the prize money was modest, endorsements contracts followed. This pushed his annual income well over $100,000 and allowed him to move from Boulder to the ski resort of Aspen in 1971. While chasing rival skier Jean-Claude Killy for the 1973 title, Sabich incurred a back injury on the final weekend of the season at Aspen Highlands. In the semifinals of the giant slalom, he hurtled over the second jump at 50 mph and caught his arm on a gate, somersaulted and landed on his back. He struggled to stand up, but was too stunned to walk and was hospitalized. Sabich was out of the next day’s slalom, and Killy won the season title in his only season on the pro tour.

Late in the afternoon of March 21, 1976, Sabich had returned from a day of skiing and was preparing to shower. He was fatally shot in the bathroom of his home by his live-in girlfriend, singer-actress Claudine Longet, ex-wife of singer Andy Williams. She claimed the gun discharged accidentally, as he was showing her how it worked. He was hit in the abdomen and lost a significant amount of blood before the ambulance arrived. He died in the ambulance on the way to the hospital, with Longet at his side. Spider Sabich was 31 years old.

Longet was charged with reckless manslaughter, however she was convicted of a lesser charge, criminally negligent homicide, a misdemeanor. Longet was sentenced to 30 days in jail, but allowed to serve the time at her convenience. She served her sentence three months later, following a vacation with her married defense attorney. After the criminal trial, the Sabich family initiated civil proceedings to sue Longet. The case was eventually resolved out of court, with the proviso that Longet never tell or write about her story.