I’ve had Phillies season tickets since 1996. I sat through some bad years and I sat through some great years, including 2008’s championship season. I’ve been to many ballparks in many different cities. The game on the field is only a fraction of the entertainment to be found at the ballpark. Sometimes the game doesn’t command the same interest as the antics in the stands. Last Sunday’s Phillies game was no exception. Once again, there was this guy… 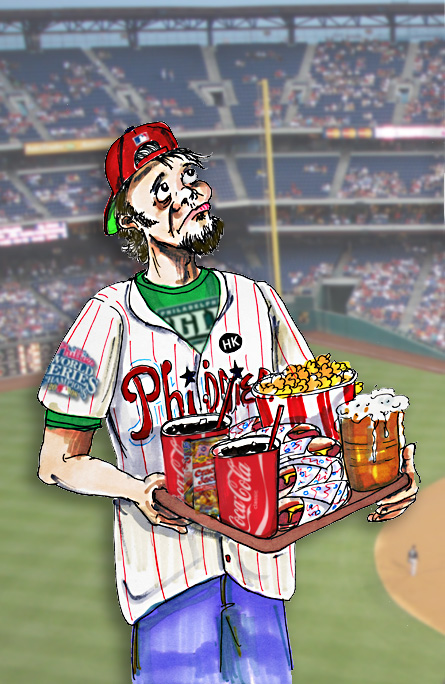 Lost. Hopelessly lost. I’ve seen him at many games. Reluctantly sent out to the concession stands by his group to load up on hot dogs and soda and beer and snacks. He waits in an endless line, missing several innings and usually a game-shattering play. Hearing the distant cheers, he stands stuck in a queue, lifting himself on tip-toes as he tries to catch a glimpse of the action on the field. Finally, his turn to pay arrives. He fumbles with a few pieces of damp currency, gets his change and hurries back to his seat. It is then he realizes he has become disoriented. He has visited so many food stands that he has forgotten where his seat is. And his friends have his ticket stub. He helplessly chooses a random aisle and spends the next five innings with his back to the game, scanning the crowd for a familiar face. The hot dogs are getting cold, the ice is melting in the Cokes, the beer is spilling. His friends don’t spot him  for Christ’s sake, THEY’RE  watching the game. Oh, it’s not always the same guy, but always he’s just as lost.

The dudes behind me account for the other entertainment in the stands. For fourteen seasons, in two different stadiums, some dude has sat behind me and kicked my seat. A child, an old man, a teen, a drunk. Doesn’t matter. They all kick. This past Sunday was my lucky day. I was treated to seat kickers AND some of the most inane conversation I’ve ever heard. There were two dudes, not much older than 21, dressed in their Phillies regalia, knocking back beer after beer and loudly expounding on the wonders of THEIR  universe…
[Note: Each statement started with an “ach”, a guttural clearing of the throat  JPiC]
Dude 1: ach, Dude, Johnny told me he’s, like, gettin’ a new car
Dude 2: ach, Dude, no way
Dude 1: ach, Dude, aw yeah. what kinda car does your mom drive? She’s got a truck, right? Does it drive good in the snow?
Dude 2: ach, Dude, it is totally cool in the snow.
Dude 1: ach, Dude what happened to your Phillies shirt?
Dude 2: ach, Dude, di’nt I tell you? Last year at the Phillies parade, I got hit by a car. I woke up the day after the parade and I had blood and dirt on my Phillies shirt and I said ‘Dude, what happened?’ and they said ‘Dude, don’t you remember? You totally got hit by a car and the dude that was driving got out all scared and shit and you started laughing and you ran away.’
Dude 1: ach, Dude, that’s awesome. Dude, y’know one time, my dad got tickets to a game back at the Vet [Veterans Stadium, home of the Phillies from 1971 to 2003.  JPiC] and my dad took me up to the press box and he knocked on the door and I met Harry Kalas [Harry Kalas was the long-time announcer for the Phillies, who passed away earlier this week.  JPiC] and he signed a ball for me and I just hung out in the press box with Harry and we were talking baseball. [Based on the “dude’s” approximate age, this anecdote is a total fabrication.  JPiC]
Dude 2: ach, Dude that’s cool. Yo’ dude, I didn’t know you smoked. Does your sister smoke? Does your mom know you smoke? Do you have to hide it from her?
Dude 1: ach, Dude, I’m gonna quit smoking in three years when I finish school.
Dude 2: ach, Dude, at my school, I was the mascot for the football team.
Dude 1: ach, What was the mascot?
Dude 2: ach, Dude, it was a cougar. It was great ’cause the girls all wanted to take their picture with me, so I had girls totally all over me. It was the best job ever. But it sucked.
Dude 1: ach, Dude, at school I have a break every morning from 9 to noon. It’s, like, the most boringest two hours.

And that’s how it went, non-stop for nine innings.
The Phillies won on a walk-off home run by Raul Ibañez. For one ticket price, I got twice the entertainment.