This week’s word of inspiration on the Inspire Me Thursday illustration blog is “lace”. 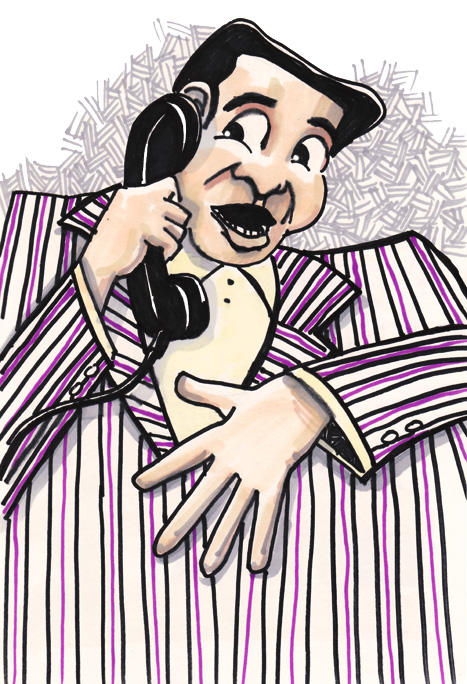 “Hell-OOOOOOOOOOOOOOOOOOOOOOOOOO Bay-BEE!”
Long before speaking those famous words, Jiles Perry Richardson, Jr. was a disk jockey on Texas radio’s KTRM, where he hosted the “Dishwashers’ Serenade” show from 11 AM to 12:30 PM, Monday through Friday. Richardson changed to late afternoons and along with the time change, he also introduced a new on-air persona. He had seen the college students doing a dance called The Bop, and he decided to call himself “The Big Bopper”. In May 1957, he set the record for continuous on-the-air broadcasting. He performed for total of five days, two hours and eight minutes, playing 1,821 records and taking showers during five-minute newscasts. He lost 35 pounds during his marathon and he slept for the next 20 hours after it was all over.
Richardson embarked on his musical career as a songwriter. He wrote “White Lightning”, the first number one hit for George Jones. His ballad “Running Bear” (inspired in the bathtub by a bar of “White Dove” soap) was a number one hit for his Texas pal Johnny Preston.
Richardson, who played guitar, recorded his first single, “Beggar To A King”, but it failed to chart. Determined to succeed, he followed it with “Chantilly Lace”, recorded under the name The Big Bopper. “Chantilly Lace” was a huge hit, climbing to number six on the Billboard charts. Richardson performed the song in a short film for nationwide distribution to local television stations. He called the film a “music video”, thus coining the phrase. He followed that song with a second hit, a raucous novelty tune entitled “The Big Bopper’s Wedding”. Two back-to-back smashes led to Richardson joining Buddy Holly, Ritchie Valens and Waylon Jennings on the “Winter Dance Party” tour. On February 2, 1959, Buddy Holly chartered a Beechcraft Bonanza airplane to take him, guitarist Tommy Allsup, and Waylon Jennings to Fargo, North Dakota. Richardson was suffering from the flu and didn’t feel comfortable on the group’s bus. Jennings agreed to give up his plane seat to Richardson. Valens, who had never flown in a small plane, anxiously requested Allsup’s seat. They flipped a coin, and Valens won the toss. At about 1 AM on February 3, the plane crashed into Albert Juhls corn field killing everyone aboard.
Richardson was survived by his wife and four year-old daughter. His son, Jay Perry Richardson, was born two months later in April 1959.
Jay Richardson, took up a musical career and is known professionally as “The Big Bopper, Jr.” In January 2007, Jay requested that his father’s body be exhumed and an autopsy be performed to settle the rumors that The Big Bopper initially survived the crash. Jay observed as the casket was opened. The autopsy was performed with Jay present. The autopsy findings indicated there are fractures from head to toe and The Big Bopper died immediately. He didn’t crawl away and he certainly didn’t walk away from the plane. After the autopsy, Richardson’s body was placed in a new casket and was reburied next to his wife in Beaumont, Texas. In December 2008, Jay Richardson announced that he would be placing the old casket up for auction on eBay with  The Texas Musician’s Museum receiving a share of the profits.