This week’s challenge word on Illustration Friday is “celebrate”. 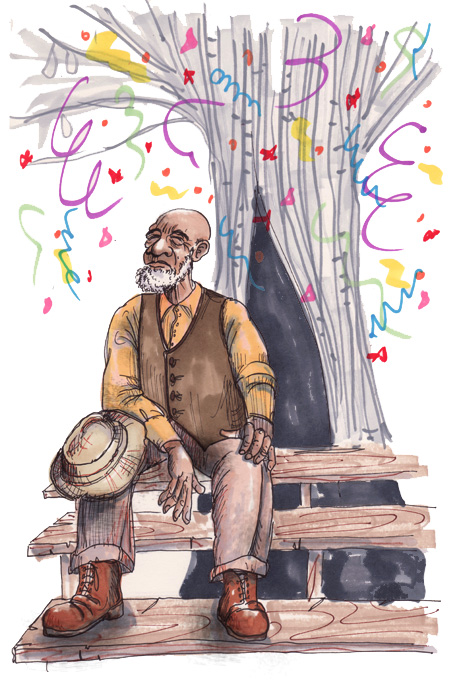 Wake Nicodemus! by Henry Clay Work
Nicodemus, the slave, was of African birth,
And was bought for a bagful of gold,
He was reckon’d as part of the salt of the earth,
But he died years ago very old.
‘Twas his last sad request, so we laid him away
In the trunk of an old hollow tree.
“Wake me up!” was his charge, “at the first break of day,
Wake me up for the great Jubilee!”

The “Good Time coming’ is almost here!
It was long, long, long on the way!
Now, run and tell Elijah to hurry up Pomp,
And meet us at the gum-tree down in the swamp,
To wake Nicodemus today.

He was known as a prophet – at least was as wise –
For he told of the battles to come;
And he trembled with dread when he roll’d up his eyes,
And we heeded the shake of his thumb,
Though he clothed us with fear, yet the garments he wore
Were in patches at elbow and knee,
And he still wears the suit that he used to of yore,
As he sleeps in the old hollow tree.

Nicodemus was never the sport of the lash,
Though the bullet has oft crossed his path.
There were none of his masters so brave or so rash,
As to face such a man in his wrath,
Yet his great heart with kindness was filled to the brim,
He obeyed who was born to command,
But he long’d for the morning which then was so dim –
The morning which now is at hand.

“Wake Nicodemus” was written in 1864 as an abolitionist anthem and a call for freedom. The character of Nicodemus asks those around him to “Wake me up for the great Jubiliee” – the time of celebration when all slaves are free. By allowing the listener to enter into Nicodemus’ life – to know him and sympathize with him – the case for abolition is made more compelling. Nicodemus is characterized as a prophet: wise and impressive, almost supernatural. As he looks forward to the time to celebrate, the listener longs for that day, too.

Click HERE to hear the Tim Curry’s unusual version of “Wake Nicodemus” from his album “Read My Lips”.