Here’s an unusual suggestion for inspiration from the website Inspire Me Thursday  “peeling paint”. So, it has inspired an unusual illustration. Even for me. 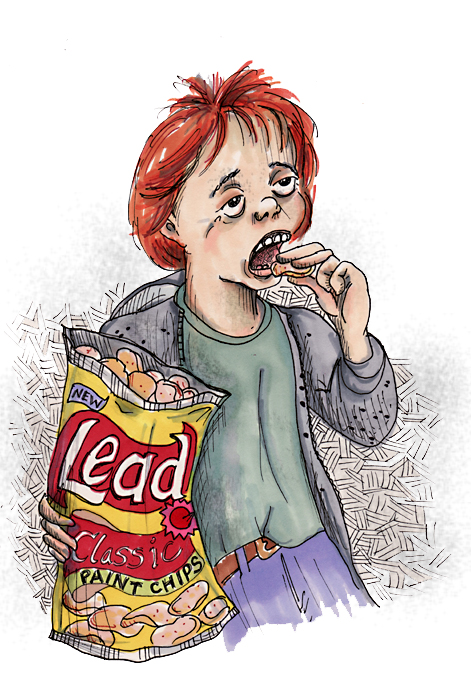 When I was a kid in the early 1970s, TV stations showed a lot of public service announcements. Most of them were for causes that are outdated, like THIS ONE for Radio Free Europe. Some causes have had numerous updating over the years, like this Smokey Bear PSA (featuring narration by the great Paul Frees). There was THIS famous one featuring the late Iron Eyes Cody and narrated by William Conrad, of “Cannon” fame.
But there was one that, even as a child, freaked me out. It was for the dangers of children ingesting lead paint. It was set in a run-down apartment building. While the narrator spoke, a small boy stared out a window, wide-eyed and purposeless and possibly abandoned. As the horrors of lead poisoning are expounded, the boy turns to the camera, picks some paint chips off the crumbling window sill and pops them in his mouth.
“Why doesn’t the cameraman stop him?”, I thought.