For my first post of 2009, I’ll relate an interesting story that I recently came across.

As I write this, incumbent Norm Coleman and challenger Al Franken are battling for the lead in a heated race for a US senator from Minnesota. A tedious recount has taken place since November 2008 and a winner has still not been determined. A former writer for Saturday Night Live, Al Franken is an Emmy Awardwinning comedian, radio host, political commentator, and politician. 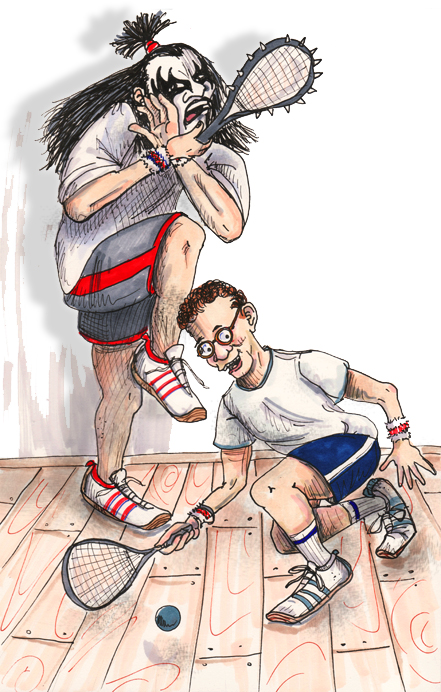 Al Franken left the writing staff of Saturday Night Live briefly between 1980 and 1985, although he still maintained residence in New York City. One day in 1982, Franken was waiting for a friend at a New York City racquetball club for some scheduled game time. While Franken was waiting, in walked Gene Simmons, looking for trouble. Franken didnt recognize him because Simmons was not sporting the Kabuki-monster makeup that made him and KISS household names. Simmons challenged Franken to a game. Franken politely explained he was waiting for somebody else. Simmons, the voice behind Calling Dr. Love,” growled, Ill kick your ass!

Annoyed, but ready for a challenge, Franken agreed to a match and proceeded to humiliatingly defeat the rocker in a matter of minutes. Furious, Simmons demanded another opportunity and still taunted Franken with claims of “I’ll kick your ass!”  By then, Frankens racquetball partner had arrived. Franken explained he would have to pass on a pointless rematch. Simmons began to cluck his famous tongue in mock chicken noises. The “buck-buck-buck”  teasing pissed Franken off. Franken grudgingly agreed to another round, but only for a $500 stake. This caused multi-millionaire Simmons to back off and sheepishly exit.

Franken’s friend asked, “Do you know who that was?” Franken had no clue. “That was Gene Simmons from KISS!”, his friend informed. Franken shrugged and replied, “I thought he was just some creep who liked to pick fights at racquetball courts.”