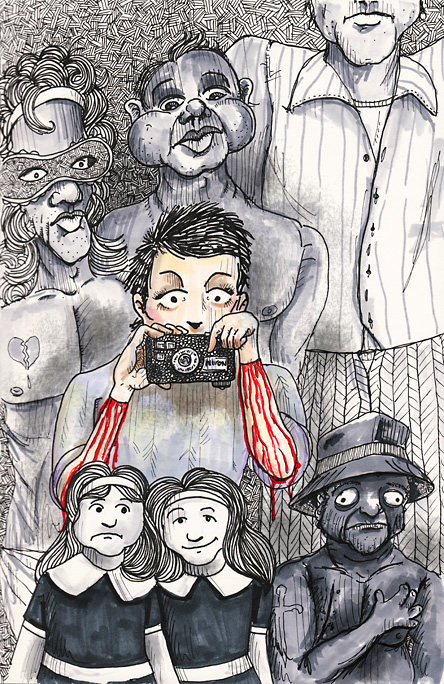 Diane Nemerov was born in New York City into a wealthy Jewish family. Her parents were fur merchants. Her older brother, Howard, served as United States Poet Laureate in 1963 and again in 1988.

When she was 14, she met and fell in love with Allan Arbus, a photographer who would later abandon photography for an acting career. (He is most famous for starring as Dr. Sidney Freedman, in the television show M*A*S*H.) Diane married Arbus when she turned 18 and the two had a fashion photography business for more than a decade. In 1959 they ended their partnership and their marriage.

Diane began studying fine art photography. In the 1960s she worked as a photojournalist, received two Guggenheim fellowships and gained critical praise for her disturbing portraits of people on the fringes of society, such as transvestites, dwarfs, giants and prostitutes. Her more famous photographs include “Child with Toy Hand Grenade in Central Park“ and “Identical Twins, Roselle, New Jersey, 1967“. (This photo is echoed in Stanley Kubrick’s film The Shining, which features twins in an identical pose.) Her voyeuristic approach has been criticized as demeaning to her subjects. In an effort to dispel this image, Diane undertook a study of “conventional” people, including Gloria Vanderbilt’s infant son, future CNN anchorman Anderson Cooper.

At 48, after a period of depression, Diane committed suicide by ingesting a large quantity of barbiturates. Not convinced that the drug overdose would be effective, she also slit her wrists.