The challenge at Monday Artday this week is “illustrate a Beatrix Potter story”. 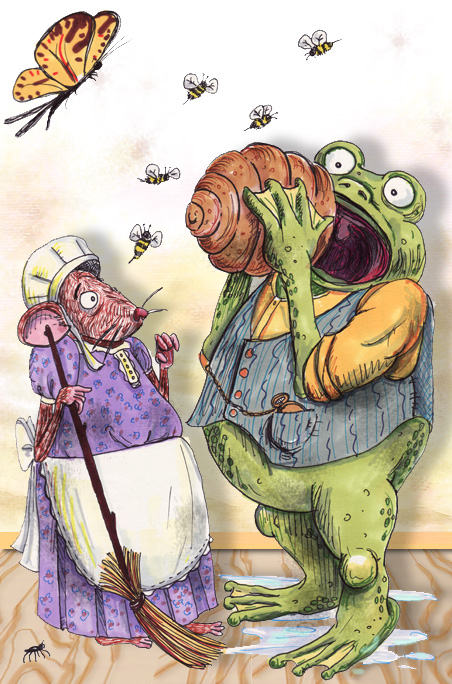 Beatrix Potter was born in London in 1866. She was educated at home by a succession of governesses, and had little opportunity to mix with other children. Even her younger brother was rarely at home. He was sent to boarding school, leaving Beatrix alone with her pet animals. She had frogs, newts, ferrets, a bat and two rabbits. Every summer, the affluent Potter family would rent a country house. Beatrix immediately fell in love with the rugged mountains and dark lakes, and learned the importance of trying to conserve the region, something that was to stay with her for the rest of her life. From the age of 15 until she was past 30, she recorded her everyday life in journals, using her own secret code which was not decoded until 20 years after her death.

Beatrix began an interest in biology, specifically fungi. She was later one of the first to suggest that lichens were a symbiotic relationship between fungi and algae. At the time, the only way to record microscopic images was by painting them, Beatrix made numerous drawings of lichens and fungi. As the result of her observations, she was widely respected throughout England as an expert mycologist. She also studied spore germination and life cycles of fungi. Potter’s set of detailed watercolors of fungi, numbering some 270 completed by 1901, is in the Armitt Library. She also lectured at the London School of Economics several times.

When Beatrix was 27, she sent a story about rabbits to the young son of her last governess. She was encouraged to publish the story so she borrowed it back and made it into the book entitled The Tale of Peter Rabbit. She struggled to find a publisher for it and eventually had 250 copies printed privately. A year later, Frederick Warne & Co agreed to publish 8,000 copies in a small format, easy for a child to hold and read. Beatrix was asked to re-illustrate it in colour. It was extremely well received and by the end of the year 28,000 copies had been printed. She followed Peter Rabbit with The Tale of Squirrel Nutkin. The popularity of these and subsequent books rewarded Beatrix with a substantial income from their sales. She also became engaged to the publisher, Norman Warne in 1905, against her parents’ wishes. Their opposition to the wedding caused a breach between Beatrix and her parents. However, the wedding never occurred. Norman fell ill and died within a few weeks. Beatrix was devastated.

Beatrix eventually wrote 23 books, all in the same small format. Her writing efforts finally ended around 1920 due to poor eyesight.

This illustration is for Beatrix’s book “The Tale of Mrs. Tittlemouse”, written in 1910. It is the story of a fastidious woodmouse named Mrs. Tittlemouse. She obsesses over keeping her home clean, constantly sweeping and chasing out unwanted visitors. She is horrified when a big, sloppy, wet frog named Mr. Jackson enters her home looking for honey.

Look! I can do cute!