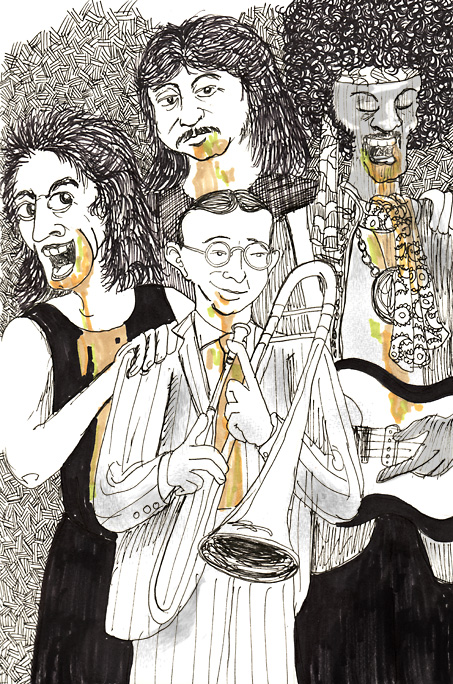 The differences between genres of music has intrigued me for some time. And as different as they seem, these four performers from different eras have something in common.
Tommy Dorsey was a giant in the big band era. His orchestra included, at one time or another, trumpeters Doc Severinsen, and Charlie Shavers, drummers Buddy Rich, Louis Bellson and Gene Krupa, singers Jo Stafford, Dick Haymes and Frank Sinatra and trombonist Nelson Riddle. In 1956, Tommy Dorsey took some sleeping pills and rested after a heavy meal. While asleep, he choked to death on his own vomit.
Bon Scott was the lead singer for Austailia’s AC/DC. Originally, the band’s truck driver, Scott was recruited by Angus and Malcolm Young to replace current singer Dave Evans. Scott accepted the Young brother’s proposal and AC/DC went on to become a wildly popular heavy metal band in their native Australia and later the world. In 1980, at the age of 33, Scott went out for a night of heavy drinking with some friends. He was found dead behind the wheel of a parked car in South London. He had passed out and choked to death on his own vomit.
Jon Bonham was the drummer for Led Zeppelin. After the break-up of The Yardbirds, Jimmy Page saw Bonham drum at a performance and was convinced this was the guy he needed for his new band. Led Zeppelin’s live performances featured half hour drum solos culminating with a manic Bonham banging on his drumkit with his bare hands. Led Zeppelin gained worldwide popularity and are still revered after almost thirty years since their last studio album. In 1980, John Bonham attended a rehearsal for Zeppelin’s upcoming U.S. tour. On the way to the rehearsal, Bonham stopped for breakfast, which included sixteen shots of vodka. He continued to drink heavily after he arrived at the studio. The rehearsal ended late in the evening and the band retired to Jimmy Page’s house. After midnight, Bonham had fallen asleep and was taken to bed and placed on his side. Band manager Benji LeFevre and bassist John Paul Jones found him dead the next morning. During the night, Bonham had choked to death on his own vomit.
Jimi Hendrix was a guitarist, singer and songwriter whose guitar playing was cited as the main influence for many guitarists. Although he only produced three studio albums, his live performances were legendary. His stage act included playing his guitar behind his head, playing with his teeth and then setting the instrument on fire. One evening in September 1970, Hendrix attended a party in London. Afterwards, he was picked up by his girlfriend and driven to her room at the Samarkand Hotel. He had taken nine of her prescription sleeping pills. During the night, Hendrix had choked to death on his own vomit.