The illustrationfriday.com word this week is “enough”. 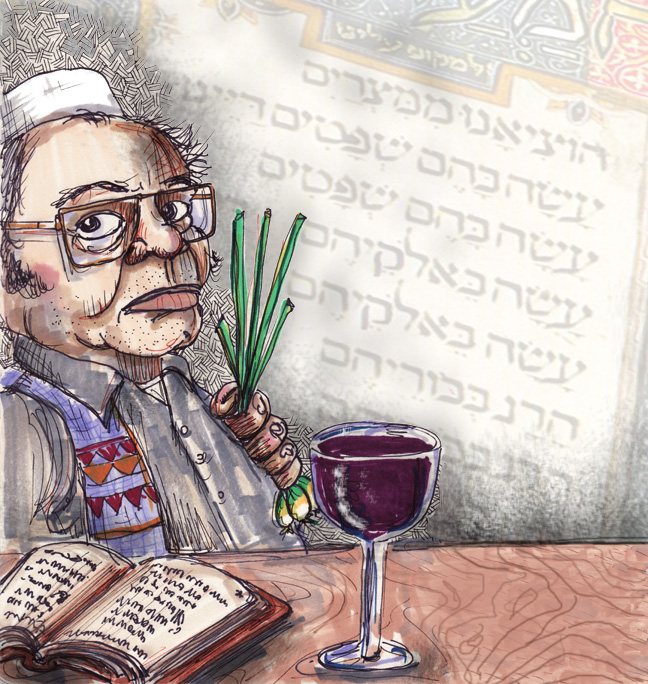 Dayenu is a song that is part of the Jewish holiday of Passover. The word “Dayenu” means “it would have been enough for us”. This traditional Passover song is about being grateful to God for all of the gifts he gave the Jewish people, such as taking them out of slavery, giving them the Torah and Shabbat, and had God only given one of the gifts, it would have still been enough. This is to show much greater appreciation for all of them as a whole. The song appears in the haggadah after the telling of the story of the exodus and just before the explanation of Passover, matzah and the maror.

Jews in Afghanistan traditionally hit each other over the head with green onions during the refrain of the ninth stanza of Dayenu. This may be due to a passage in Numbers 11:5-6, where the Israelites see manna and recall Egypt. “We remember the fish that we used to eat in Egypt, the cucumbers, the melons, the leeks, the ONIONS and the garlic.

Zebulon Simentov hasn’t had anyone to smack on the head with green onions since Passover 2004. Although Jews have a 2,500 year history in Afghanistan, Zebulon and Ishaq Levin were the only two left since late 1999. They shared living space in the synagogue for which Ishaq was the “shamash” or caretaker. Despite sharing living quarters, Zebulon and Ishaq were bitter enemies and never spoke to each other. The two men silently went through their prayer rituals and their holiday preparations. They blamed each other for their regular arrests and beatings at the hands of the Taliban. Ishaq would tell Taliban officials that Zebulon was a spy. Zebulon blamed Ishaq for the confiscation of the synagogue’s Torah. They glared at each other when they crossed paths in the synagogue’s courtyard. One morning in January 2005, Zebulon found the 70 year-old Ishaq dead in his room in the synagogue. Zebulon contacted his own family, who in turn contacted Ishaq’s family. Ishaq’s family and the Israeli government arranged for burial at The Mount of Olives.

Zebulon’s wife and daughter live in Israel, leaving Zebulon as the only Jew in Afghanistan. He has no plans to leave. He will continue to read from his tattered scriptures and, when Passover rolls around, he will smack himself with green onions.