The challenge word this week on Monday Artday is “steampunk”. This may be an unfamiliar concept to some, so I’ll do my best to explain it. According to Wikipedia,  the Internet source for everything (including a little bullshit), steampunk is a genre of  fiction that came into prominence in the 1980s and early 1990s. The term denotes works set in an era or world where steam power is still widely usedusually the 19th century, and often set in Victorian era Englandbut with prominent elements of either science fiction or fantasy, such as fictional technological inventions like those found in the works of H. G. Wells and Jules Verne, or real technological developments like computers occurring at an earlier date. Clear on that? I didn’t think so. Well, If you are one of the six people who saw the Will Smith-Kevin Kline movie “Wild Wild West“, you get the idea. That said, let’s get to my illustration. 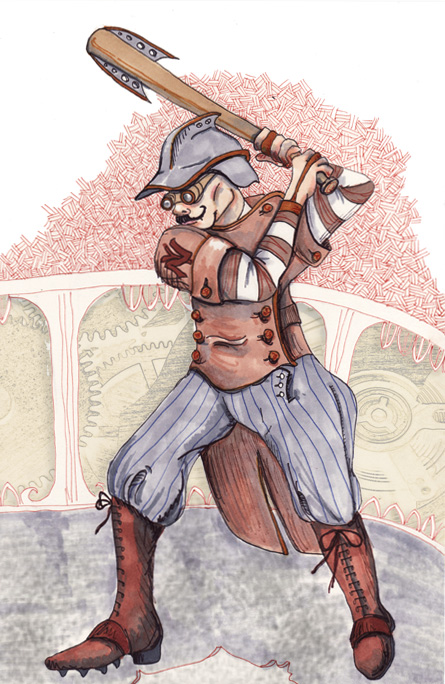 In the late nineteenth century, a field game called base-ball  was becoming popular throughout the countryside. With the game still in its infancy, participants sought ways and means with which to gain an edge over their adversaries. Long before the abundance of steroids infiltrated these contests, players relied on technology to enhance their performance. One such player was C. Abercrombie Wheatsworth III. “The Crom”, as he was known to be called by spectators, was the mid-short fielder for the Manhattan Island Gyroscopes of Greater New York State.
In the late summer of 1896, The Gyroscopes were embroiled in a brutal struggle with the Cleveland Steamers, their league division rivals. Tempers were high and nerves were on edge as the score stood in a dead heat at 3-3 in the crucial bottom of the ninth inning. The winning run was on third base. “The Crom” approached the lime-delineated batter’s box and keenly stared down the hurler on the mound. The Steamers’ pitcher, Dirk T. Sanchez, was a mysterious foreign import who had previously played for the Mexican League in Zihuatanejo in the western part of Guerrero.
“The Crom” motioned to the equipment boy to bring his secret weapon. The boy scampered to the dugout and returned with a gleaming length of polished brass, chrome and wood, topped with ornate and elaborate wind deflectors affixed to the massive barrel. “The Crom Pulveritizer” he called it. These were times of limited equipment stipulations and few regulated ordinances. The lanky Sanchez deftly pitched the cowhide-covered projectile at full velocity in Wheatsworth’s direction. Wheatsworth reared back and struck the orb squarely across the brown leather stitches. The sphere rocketed high and far. With his chest puffed out like a Christmas goose, “The Crom” triumphantly circled the bases and once again was the hero of Old New Amsterdam.