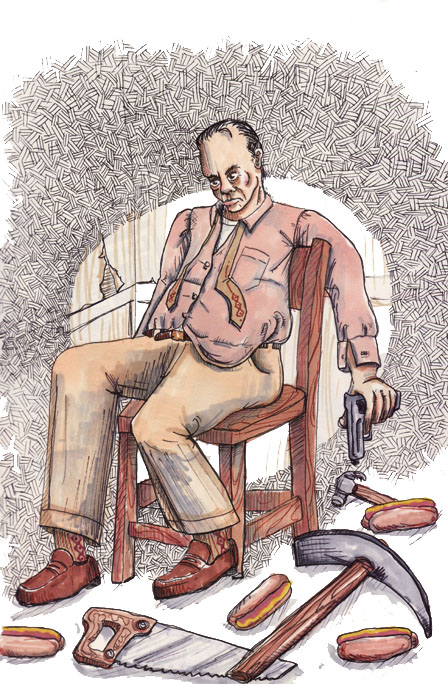 Rasmus Karl Therkelsen Gottlieb was born in 1886 in central Copenhagen, Denmark. As a teenager, he apprenticed as a machinist. He married and had two children, but with the outbreak of World War I, he entered the military. In 1916, after his discharge from military service, he headed to America alone, hoping to send for his family later (he didn’t). He had $25 in his pocket and spoke no English. He found work in a foundry. By summer 1917, he worked as an auto mechanic.

In Denmark, Karl’s father worked as a curtain-puller at a theater. Hanging around the theater, Karl got the inspiration to act. In late 1917, Karl appeared in his first picture. It was the first of a series of anti-German propaganda films. Karl was paid three dollars a day. He was making three dollars a week as a mechanic. The films were very successful. Rasmus Karl Therkelsen Gottlieb changed his name to “Karl Dane” and officially became an actor.

In December 1924, Karl was cast in King Vidor‘s “The Big Parade”. The movie was a major success, becoming the second highest grossing silent film of all time, making almost $6.5 million.

Karl worked alongside Rudolph Valentino in “Son of the Sheik”. This film was also a success. Karl signed a contract with MGM in 1926. He began to appear as comic relief in several films including “The Scarlet Letter”, “La Boheme” and “Alias Jimmy Valentine”. Soon after signing his MGM contract, Karl teamed with George K. Arthur as a comedic duo. Together they were dubbed Dane & Arthur. In May 1927 the duo’s first film was an instant success, as were their subsequent films. By June 1927 MGM signed Karl to a long term contract. Dane & Arthur’s last silent short was released in 1928. Their first talkie was released a short time later. George Arthur had distinct British accent. Karl, however, had a thick guttural Danish accent which made his English hard to understand. Five films later, Karl lost his contract with MGM and suffered a nervous breakdown. After some much-needed rest, Dane & Arthur made a few shorts for Paramount and RKO and set out for a short vaudeville tour.

In November 1931, after the tour, Karl and some friends formed a mining corporation. The venture failed. Karl headed back to vaudeville with a solo comedic act. His act was panned by critics and was short lived.

By the summer of 1933, unable to get a movie contract, a desperate Karl had given up on films and turned again to mining. He spent three months driving up and down the West Coast trying to find a good mining deal and ended up losing $1,100 when various ventures never took off. Deeply depressed and broken down, Karl took on several jobs including mechanic, waiter, and carpenter. He was unable to hold any of these jobs. In late 1933, Karl purchased a hot dog stand outside MGM Studios, where just five years earlier he was a huge and productive star. The business failed, as it was shunned by his former friends. Karl tried to find work with his former studio as an extra or carpenter but was turned away. He was seeking a job that would pay $5 a day.

On April 14, 1934, Karl didn’t keep his movie date with a young woman named Frances Leake. A worried Frances arrived at Karl’s apartment. After receiving no response at the door, Frances got his landlady to unlock his apartment door. Inside the tiny unit they found Karl, slumped in a chair, a revolver at his feet and surrounded by his scrapbooks filled with rave reviews and studio contracts. There was also a note which read, “To Frances and all my friends  goodbye.”

Karl had shot himself in the head.