The sugarfrostedgoodness.com challenge word this week is “monsters”. 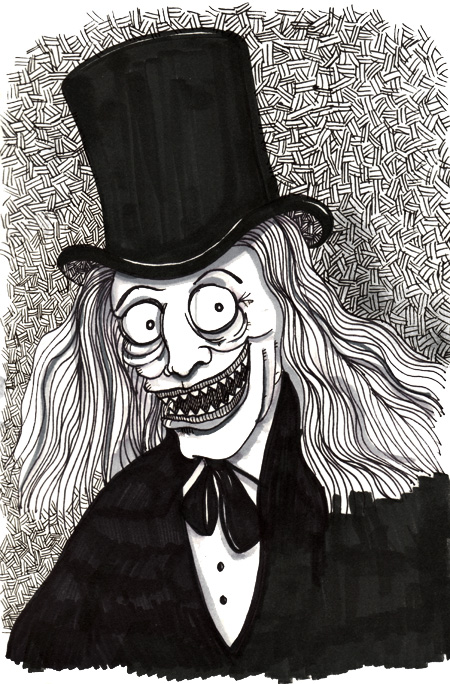 In 1927 Tod Browning directed Lon Chaney Sr. in the film “London After Midnight”. This silent film classic has become the most famous “lost” motion picture.
The movie told the story of wealthy Sir Roger Balfour. Balfour is found shot to death in his home. Inspector Burke, as played by Chaney, is called in to investigate. A suicide note is found and the case is supposedly closed. Five years later, Balfour’s old residence is taken up by a man in a beaver-skin hat, with large fangs and gruesome, sunken eyes. His assistant is a ghostly woman, with flowing robes and raven black hair. It is suspected by neighbors that Balfour has returned from the dead.
In addition to his portrayal of the inspector from Scotland Yard, Lon Chaney Sr. also played the mysterious stranger that moves into the vacant Balfour Home. Chaney, known as “The Man of a Thousand Faces”, designed his own make-up for his film appearances. His visual effects for London After Midnight were particularly horrifying. The teeth Chaney wore were made of gutta-percha, a hard rubber-like material. The bulging, hypnotic eye effect was achieved with special wire fittings which he wore like monocles. He allegedly put egg albumen in his eyes to give them a “clouded” appearance.
The film was well-received at the box-office, grossing almost $500,000. It was even remade by Browning in 1937 as “Mark of the Vampire” starring Bela Lugosi. However, in 1965, an electrical fire broke out in MGM Film Storage Vault #7. Countless films from the silent era, including the last known print of “London After Midnight”, were destroyed.
In 2002, Turner Classic Movies commissioned film restoration producer Rick Schmidlin to produce a 45 minute reconstruction of the film, using still publicity photographs shot while the film was in production in 1927.
There are rumors that one copy of the original remains in a private film collection in Canada.