In an effort to steer away from a proliferation of cuteness, Monday Artday offers “Giant Japanese Monsters” as this week’s challenge. 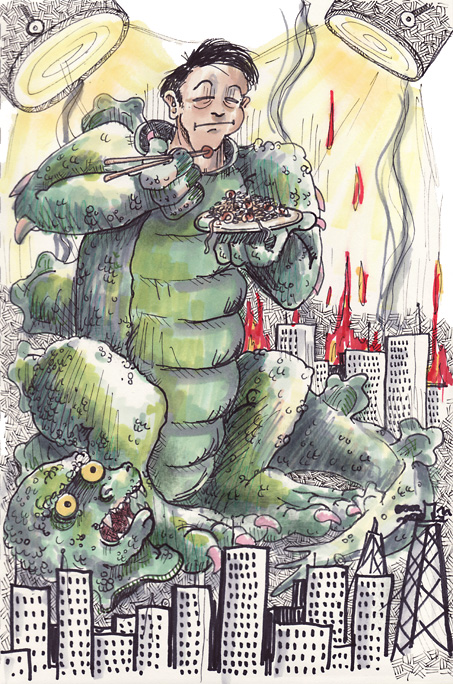 In 1954, Japanese actor Haruo Nakajima portrayed Godzilla (known as “Gojira” in Japan). He eventually played Godzilla twelve times (more than any other actor) until 1972, when he retired the character, although he continued to act in other movies.
The original Godzilla suit, which weighed about 220 pounds was very stiff and heavy. Mr. Nakajima could only walk about 30 feet before needing to get out of the costume because of the heat. The lights in the studio also added to the heat inside the costume, sometimes reaching nearly 120 degrees. Mr. Nakajima never complained. He had fainted a few times inside the suit, falling over and ruining a few expensive miniature sets which had to be rebuilt.
Mr. Nakajima said that the most difficult aspect of portraying was shooting the ending for “Godzilla Raids Again” in 1955. He had to stand in the middle of the set while a large amount of crushed ice was poured down on him. It was very cold and there was an additional floor underneath the floor of the set. A set assistant was standing on the lower floor while the ice was tumbling down on Mr. Nakajima. The floor of the set collapsed from the weight of the ice, so both Mr. Nakajima and the assistant were buried under crushed ice.
Now, at 79, Mr. Nakajima attends Godzilla and Sci-Fi conventions on a semi-regular basis.