The challenge on sugarfrostedgoodness.com this week is “ape”. 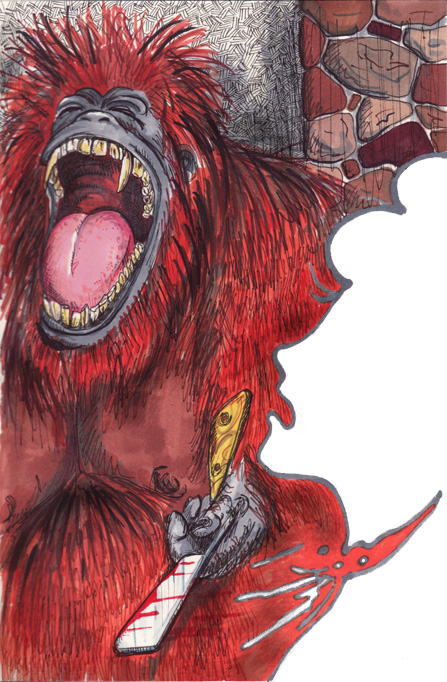 In 1841, Edgar Allan Poe published “The Murders in the Rue Morgue”. It is considered to be the first detective story, preadating the first Sherlock Holmes story by forty-six years and Agatha Christie‘s birth by fifty-nine years. Poe referred to it as one of his tales of ratiocination, meaning process of reasoning.
The story is told by an unnamed narrator and friend of the main character, C. Auguste Dupin. As the first true fictiion detective, Poe’s Dupin is a man in Paris who decides to solve the mysterious brutal murder of two women in that city after a suspect has been arrested. Numerous witnesses are quoted in the newspaper as having heard a suspect, though the witnesses each think it was a different language. At the murder scene, Dupin finds a suspicious hair that does not appear to be human. He places an advertisement in the newspaper asking if anyone has lost an “Ourang-Outang”. When he visits the sailor that answers the ad, he explains how he determined that the animal is the actual murderer in the Rue Morgue.
The Dupin character established many literary devices which would be used in future fictional detectives including Sherlock Holmes and Hercule Poirot. Many later characters, for example, follow Poe’s model of the brilliant detective, his personal friend who serves as narrator, and the final revelation being presented before the reasoning that leads up to it. Dupin himself reappears in two more Poe stories, “The Mystery of Marie Roget” and “The Purloined Letter”.
The word “detective” did not exist at the time Poe wrote “The Murders in the Rue Morgue.” The story establishes an urban theme which was reused several times in Poe’s fiction, likely inspired by Poe’s time living in Philadelphia. His plot twist of “orangutan as murderer” was likely inspired by the crowd reaction to an orangutan on display at the Masonic Hall in Philadelphia in July 1839.