The illustrationfriday.com challenge word this week is “homage”.
hom·age (ˈä-mij or ˈhä-mij) n. 1. expression of high regard 2. something that shows respect or attests to the worth or influence of another 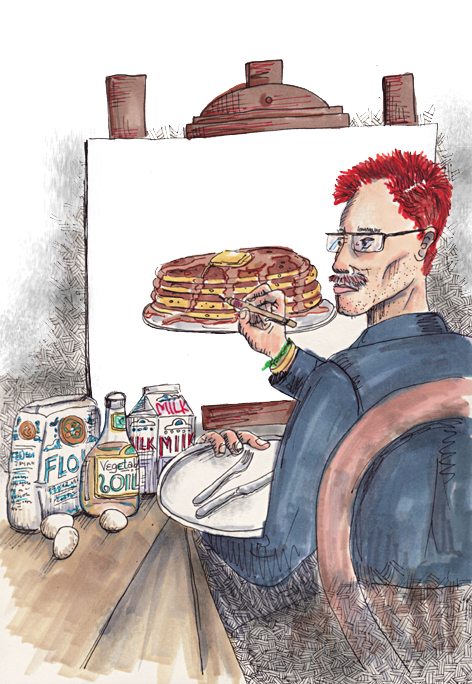 I thought of several ideas for this topic. This guy suggested paying homage to René Magritte. Magritte is his favorite artist. Magritte was also the favorite artist of an illustration teacher I had in art school (many years ago).
Magritte was born in 1898, the eldest son of Léopold Magritte, a tailor, and Adeline, a milliner. He began drawing lessons in 1910. In 1912, his mother committed suicide by drowning herself in the River Sambre. Magritte was present when her body was retrieved from the water. The image of his mother floating, her dress obscuring her face, may have influenced a 1927-1928 series of paintings of people with cloth obscuring their faces, including Les Amants. His work frequently displays a juxtaposition of ordinary objects in an unusual context, giving new meanings to familiar things. The representational use of objects as other than what they seem is typified in his painting, The Treachery of Images, which shows a pipe that looks as though it is a model for a tobacco store advertisement. Magritte painted below the pipe, Ceci n’est pas une pipe (This is not a pipe), which seems a contradiction, but is actually true: the painting is not a pipe, it is an image of a pipe.
My illustration is an homage to Magritte, based on his 1936 painting La Clairvoyance.