The challenge word at Monday Artday this week is “pirates”. 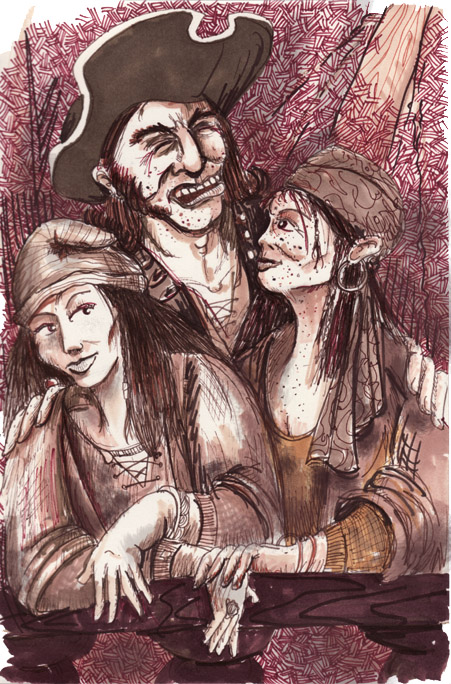 John Rackam, also known as Calico Jack because of his preference for wearing brightly-colored patchwork pants, was a moderately successful pirate. Rather than attacking plump rich targets, Rackam preferred using a small sloop to attack local merchants and fishing vessels. He is most famous for his association with two women pirates, Ann Bonny and Mary Read.

In 1719, Rackam sailed to the Bahamas. He began an affair with Anne Bonny, an Irish-born woman whom he met in a local tavern. When she became pregnant, he took her to some friends he had in Cuba to take care of her during her pregnancy. Once their money began to run out, Rackam returned to piracy and convinced Bonny to come with him, which she did, disguised as a man. He again went back to plundering his standard small local merchants in the West Indies. A woman by the name of Mary Read also disguised herself as a man to join the crew, after her ship was taken during a raid. Bonny and Read became close companions. They met when Bonny walked in on Read undressing one day, and she discovered her secret. The two women agreed to keep this from everyone aboard ship. It is believed that, at first, their attraction to one another was of a romantic nature.

But, Read’s true identity would not remain secret for long. Rackham became suspicious of Bonny’s close relationship with the new sailor, and demanded an explanation. When Read confessed that she was actually a woman, Rackham allowed her to stay on as a member of his crew, eventually revealing her secret to the other crew members. However, this had no effect on her service, and she was accepted on board the ship as Bonny had been.

Mary Read fell in love with one of the younger pirates on the ship. That pirate got in a quarrel with another older crewman and set a duel for the next day. Mary, knowing that her lover stood no chance, started a quarrel with the older man and challenged him to a duel that would take place before the pending duel with her lover.

They proceeded with an ambitious clash of blades. She ably avoided the other pirates attacks, all the while waiting for him to make a mistake. It came when the pirate stumbled while lunging at her, and Mary immediately seized the opportunity. She ripped her shirt open, exposing her breasts to the mans bewildered gaze. While he stood gaping, Mary cut his throat.

In October 1720, Rackham and his crew were attacked by pirate hunter Jonathan Barnet, who was working for the governor of Jamaica. Most of Rackham’s crew did not put up much resistance, as many of them were too drunk to fight. However, Read and Bonny, who were sober, fought fiercely and managed to hold off Barnet’s troops for a short time. After their capture, Rackham and his crew were sentenced to be hanged. Bonny chastised the imprisoned Rackham by saying, “I am sorry to see you here Jack, but if you had fought like a man, you need not be hanged like a dog.”

At their trial, Read and Bonny both claimed they were pregnant. In accordance with English common law, both women received a temporary stay of execution until they gave birth. Mary Read died in prison from a fever and never delivered.
Curiously, it is at this point that Anne Bonny disappears from history.