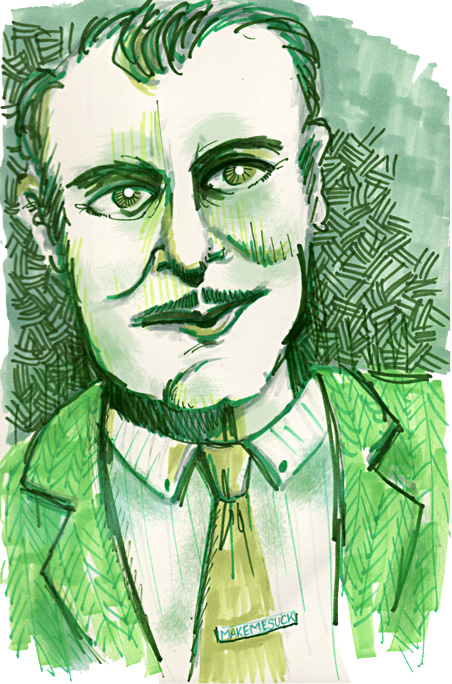 Born Albert Van Ecke in Brooklyn, New York, Albert Dekker made his professional acting debut with a Cincinnati stock company in 1927. Within a few months, Dekker was featured on Broadway.

Dekker moved to Hollywood in 1937, and made his first film, The Great Garrick. He returned to the stage and replaced Lee J. Cobb as Willy Loman in the original 1949 production of Death of a Salesman, and during a five-year stint back on Broadway in the early 1960s, he played the Duke of Norfolk in A Man for All Seasons, with Paul Scofield. Dekker appeared in some seventy films from the 1930s to 1960s, but his three most famous screen roles were as a mad scientist in the 1940 horror film Dr. Cyclops, as a vicious hitman in the The Killers, and as an unscrupulous railroad detective in The Wild Bunch, his last motion picture.

Dekker’s interest in politics led to his winning a seat in the California State Assembly for the 57th Assembly District in 1944. Dekker served as a Democratic member for the Assembly during the McCarthy era, and became an outspoken critic of U.S. Senator Joseph McCarthy’s tactics.

Dekker was married actress Esther Guernini. The couple had two sons and a daughter before divorcing. Their sixteen-year-old son, Jan, had been experimenting for over a year on development of a rifle silencer. In 1967, he died of an accidental, but self-inflicted gunshot.

On Thursday evening, May 2, 1968, Dekker and his fiancée, Geraldine Saunders, attended the opening of Zero Mostel’s new play in Hollywood. After the show, Dekker went home to his rented Hollywood apartment. He and Saunders had plans to go out again on Saturday evening. Saturday night passed and Saunders had not heard from Dekker. Saunders became concerned. First thing Sunday morning, she went to his apartment to find his door covered with notes from friends who were also trying in vain to contact him. She slipped a note of her own under the door. When she returned that evening and found it still in place, she went immediately to the building manager. The manager opened the front door which had been locked but not bolted. Everything seemed to be in order until they tried the bathroom door. It was chained from the inside. They forced it open. Saunders passed out from the sight of what they found.

The 6 feet 3 inch, 240-pound Dekker was kneeling nude in the bathtub, a hypodermic needle sticking out of each arm. A hangman’s noose was around his neck but not tight enough to have strangled him. A scarf was tied over his eyes and something like a horse’s bit was in his mouth. Fashioned from a rubber ball and metal wire, the bit had chain “reins” that were tightly tied behind his head. Two leather thongs were stretched between the leather belts that girded his neck and chest. A third belt, around his waist, was tied with a rope that stretched to his ankles, where it had been tied in some kind of lumber hitch. The end of the rope, which continued up his side, wrapped around his wrist several times and was held in Dekker’s hand. Both wrists were clasped by a set of handcuffs. Written in lipstick, above two hypodermic punctures on his right buttock, was the word “whip” and drawings of the sun. Sun rays had also been drawn around his nipples. “Make me suck” was written on his thorax and “slave” and “cocksucker” on his chest. On his lower abdomen was drawn a vagina. He had apparently been dead since Friday and his awkward position had colored his lower body a deep blood purple. He was 62 years old.

During the brief investigation, detectives noted that there were no signs of forced entry or a struggle. Dekker’s death was eventually ruled accidental. The coroner determined that Dekker accidentally asphyxiated himself while attempting autoerotic asphyxia.