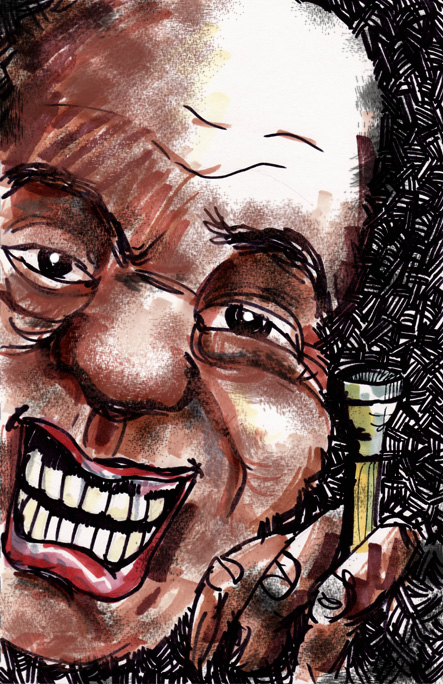 Louis Armstrong was one of the most charismatic and innovative performers of the 20th century. His inspired and improvised soloing was the main influence for a fundamental change in jazz. Most famous as a cornet player, then as a trumpet player, toward the end of his career he was best known as a vocalist and became one of the most influential jazz singers.

Louis was born in 1901 in one of the poorest areas of New Orleans. His father abandoned the family when Louis was an infant and his mother left Louis and his sister to be raised my Louis’ grandmother. Louis moved back with his mother when he was five. He brought a little money into the home by delivering newspapers and selling discarded food to restaurants, but it wasn’t enough to keep his mother from prostitution. Louis hauled coal in New Orleans’ red-light district. There he experienced bands playing in brothels and dance halls. He formed a vocal quartet with three other boys and performed on street corners for tips. The Karnofskys, a family of Russian Jewish immigrants, hired Louis to work on their junk wagon. Louis purchased his first cornet with money loaned to him by the Karnofskys. To express gratitude towards the Karnofskys, who took him in as almost a family member, and fed and nurtured him, Armstrong wore a Star of David pendant for the rest of his life.

Louis’ 1926 performance of the song “Heebie Jeebies” was the turning point for “scat singing”. According to Louis, when he was recording the song with his band The Hot Five, his music fell to the ground. Not knowing the lyrics to the song, he invented a gibberish melody to fill time.

Louis continued to experiment and improve his playing for his entire career. He played with every major musical and vocal contemporary (Jimmie Rodgers, Bing Crosby, Duke Ellington, Fletcher Henderson, Bessie Smith, Ella Fitzgerald and many others) from the 1920s until his death in 1971. For thirty years, he played over 300 performances a year.

The nickname “Satchmo” is short for “Satchelmouth” (describing his embouchure). In 1932, Melody Maker magazine editor Percy Brooks greeted Armstrong in London with “Hello, Satchmo!” shortening “Satchelmouth“. Louis loved it and it stuck.

Louis Armstrong was a major financial supporter of civil rights activists, but preferred to work quietly behind the scenes, not mixing his politics with his work as an entertainer. However, he criticized President Eisenhower, calling him “two-faced” and “gutless” because of his inaction during the conflict over school desegregation in Little Rock, Arkansas in 1957. As a protest, Armstrong canceled a planned tour of the Soviet Union on behalf of the State Department saying “The way they’re treating my people in the South, the government can go to hell”.

In 1964, Louis knocked the Beatles off the top of the Billboard Top 100 chart with “Hello, Dolly”, which gave the 63-year-old performer a U.S. record as the oldest artist to have a #1 song.

Louis Armstrong died of a heart attack on July 6, 1971, at age 69, the night after playing a famous show at the Waldorf Astoria’s Empire Room. Shortly before his death he stated, “I think I had a beautiful life. I didn’t wish for anything that I couldn’t get and I got pretty near everything I wanted because I worked for it.”