The illustrationfriday.com challenge this week is “stitch“. 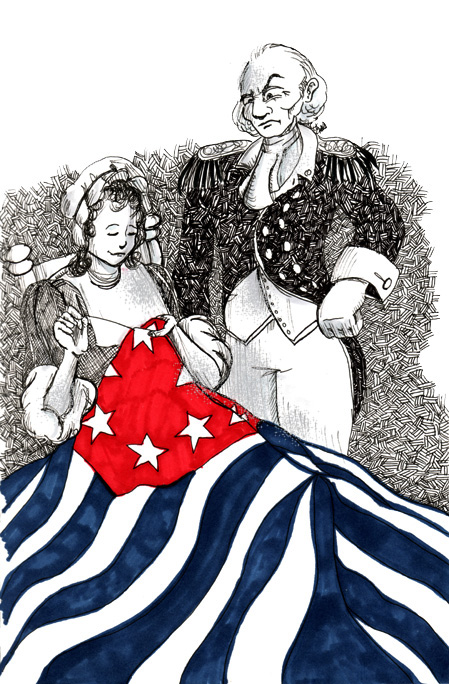 In a letter to the Board of Admiralty in 1780, Francis Hopkinson asserted that he had designed the flag of the United States of America. Hopkinson had received nothing for this work, and now he submitted a bill and asked “whether a Quarter Cask of the public wine” would not be a reasonable and proper reward for his labors. The Board forwarded the letter to Congress, which referred it to the Board of Treasury. Apparently acting on a request from Congress, Hopkinson sent a detailed bill to the auditor general, James Milligan. He sent it to the commissioners of the Chamber of Accounts, who replied six days later that they were of the opinion that the charges were reasonable and ought to be paid. The bill was then passed from government office to office, debated more and never paid. Though Hopkinson’s political adversaries blocked all attempts to have him paid for his services, they never denied that he made the designs. The journals of the Continental Congress clearly show that he designed the flag.

Elizabeth “Betsy” Griscom was the eighth of 17 children born into the Quaker family of Samuel and Rebecca Griscom. As an apprentice upholsterer, she fell in love with another apprentice, John Ross, the son of a Episcopal reverend. As Quakers, her mother and father disapproved of interdenominational marriages and disowned young Betsy. In 1773, the couple secretly traveled across the Delaware River to New Jersey, where they were married by William Franklin, Benjamin Franklin’s son. John opened up an upholstery shop and the young couple lived on the premises. John joined the military and while guarding munitions, he was killed by an accidental explosion of gunpowder. In 1777, Betsy married her second husband, Joseph Ashburn. Joseph was a mariner and was often at sea, leaving Betsy, a new mother, alone in Philadelphia. Ashburn was captured by the British and taken to Old Mill Prison in England. He died in prison before the British released the American prisoners in 1782. Betsy was visited by an old acquaintance named John Claypoole. He was a fellow prisoner and close friend of Joseph Ashburn. John was there to bring Betsy the news of her second husbands death. Betsy learned that she was once again a widow at the age of 30.
John Claypoole and Betsy rekindled their old friendship and were married in 1783. Betsy was finally able to enjoy a lengthy marriage to John Claypoole, but this 34-year relationship was not without its struggles. The couple had five more daughters together, but only four of them lived to maturity. John died in 1817, from a lengthy illness brought on by injuries he suffered in the war.
Betsy continued her upholstery business with the help of her daughter Clarissa. After over fifty years in her trade, she retired at the age of 76 and left the city to live on her daughter Susannas farm in the remote suburb of Abington. By 1833, Betsy was completely blind. She spent the last three years of her life living with her daughter Janes family on Cherry Street in Philadelphia. With family present, Betsy Ross died peacefully in her sleep in 1836. She was 84 years old.
Although Betsy Ross led an interesting life, there is no official documentation connecting her to the creation of the first American flag. The only claims to that distinction have been made by her descendants.

Oh, and I hate this guy.