The illustrationfriday.com challenge word this week is “foggy”.
Let me start off by stating that although this story ultimately ends with THIS, it is not the same type of celebrity story found elsewhere on this blog. 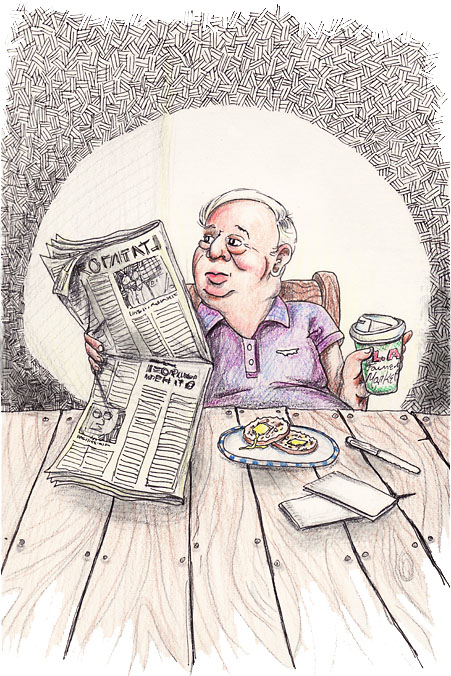 Mel Tormé was most famous for his beautifully mellow voice, but he accomplished so much in his career.
He was an actor in radio serials.
He wrote over 250 songs.
He was an accomplished drummer, playing drums in a big band led by Chico Marx. Mel befriended drummer Buddy Rich and eventually wrote a book about him. Mel also owned a drumset that drummer Gene Krupa had used for many years and he played this drumset at the 1979 Chicago Jazz Festival with Benny Goodman on the classic “Sing, Sing, Sing”.
He helped pioneer cool jazz.
He wrote songs and musical arrangements for the The Judy Garland Show. He later had a falling out with Garland and wrote a very unflattering book about her and his experiences with her show.
He was a licensed pilot.
He appeared in nine episodes of Night Court and one episode of Seinfeld.
He disliked rock and roll music, calling it “three-chord manure”, although he recorded a guest vocal with Was (Not Was) in 1983.
And Mel hated the nickname “The Velvet Fog”.

Mel Tormé’s career spanned seven decades and there was no denying his diverse talent. However, the inspiration for this illustration was a beautiful and touching story that I came across on povonline.com, the website of Mark Evanier (a very talented guy in his own right!). Mark wrote about his “almost encounter” with Mel at the Los Angeles Farmer’s Market. I urge you to read Mark’s story HERE. It is perfect.

Mr. Evanier even gave me a mention in the “News From Me” section of his website HERE.

This drawing was created entirely onsite at the 2008 WXPN XPoNential Music Festival.