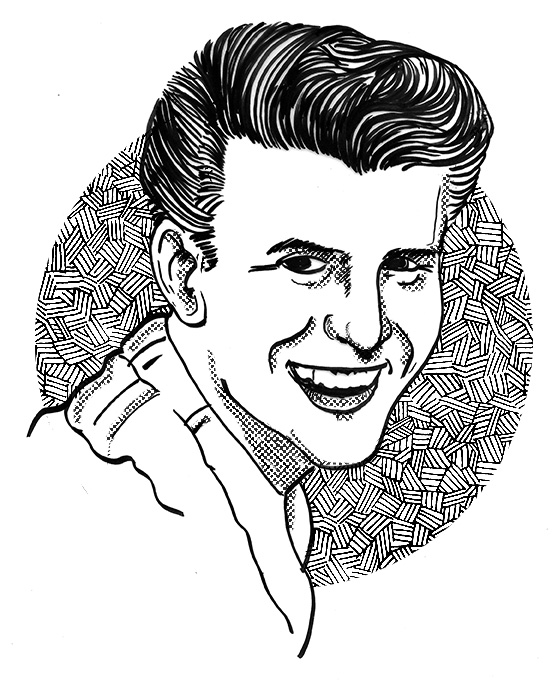 For five years now, I have been participating in the year-end Faces of Death Drawing Project. This online gathering of artists from all over the world honors those of notoriety who have passed on during the previous year. So, this is right up my alley!

My first year, I drew actor-dancer Ken Berry. The next year, I drew voice artist/jazz poet Ken Nordine. The following year, I did my best to quickly submit my choice of actor Ken Osmond in an effort to keep this little trend going. But, alas, someone else grabbed him, so I drew former Fleetwood Mac guitarist Peter Green. Last year, I got back on track and drew producer and “We Are the World” founder Ken Kragen.

This year, I totally abandoned the whole “Ken” thing and tried to secure artist Claes Oldenburg… only to get locked out by another artist. While perusing the list of other choices, I scanned my own compiled list of celebrities who died in 2022 (everyone keeps one of those, right?)  and noticed that singer Bobby Rydell was not included in the Faces of Death list. In their defense, they do state that their list is in no way comprehensive. So, I emailed the admin and was happily assigned Bobby Rydell as my 2022 subject.

I’m not sure when my drawing of Bobby Rydell will be posted on the FOD Instagram account, but here it is on my blog….

Although he never achieved the national success he so much deserved, Bobby Rydell was beloved in his hometown of Philadelphia. He had a number of hits as a teen idol in the late 50s and early 60s and even appeared opposite Ann-Margret in the big screen adaptation of “Bye-Bye Birdie.” But his fame was soon overshadowed by the burgeoning British Invasion. Bobby may have even contributed to his own decline in popularity when he inspired Paul McCartney and John Lennon to write and record “She Loves You,” a song loosely based on Bobby’s “Swingin’ School.” Nevertheless, Bobby continued to entertain and delight his legions of devoted fans, forever the smiling teenager with the pompadour, even into his 70s.

One of these days, I may still draw Claes Oldenburg.