Sister Rosetta began playing guitar as a child, accompanying her mother musically and vocally on the gospel tunes she learned in church. She began to experiment and started infusing Delta blues and New Orleans jazz into the traditional spirituals. She introduced a unique distorted sound on  her guitar,. Although a female guitarist was a rarity at the time, Rosetta was favorably received by audiences and began recording in 1938. 1938!!! Her first record, “Rock Me,” was a sly reference to the term “rock & roll,” which was a euphemism among the African-American community for sexual intercourse. She released three more “rock & roll” selections and joined up with the Cotton Club Revue, teaming with Duke Ellington, The Dixie Hummingbirds and, later, the all-white Jordannaires, presenting a mixed-race performance that was unheard of at the time. In her technique, you can hear the obvious influence from which both Jimi Hendrix and Prince drew. Rosetta remained popular for years until the fickle public (just as fickle as today’s public) moved on to the next sound. But, Sister Rosetta’s spirit weaved its way through rock and roll right up to the present. She was acknowledged as a favorite singer of Johnny Cash and Aretha Franklin. The great Chuck Berry once confessed that his entire career was one long Sister Rosetta Tharpe impersonation. 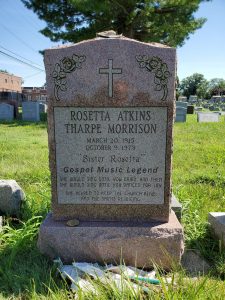 Rosetta passed away in 1973. Her grave remained unmarked for years, just like the acknowledgment of her contribution to the birth of rock and roll.

So now you know.

Portions of this story appeared in a slightly different form on my other blog, It’s Been a Slice.