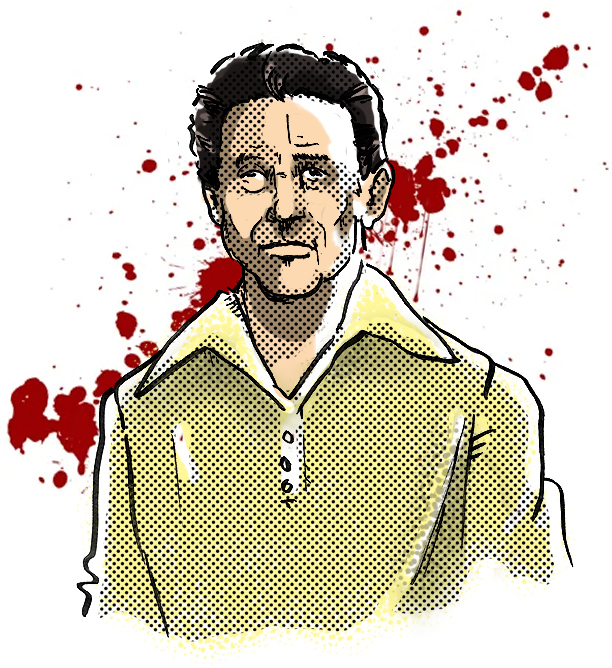 Born in Peru in 1925, Carlos Tobalina emigrated to California in 1956. He found work as a used car salesman and, in a second career, doing voice-overs on a Spanish language radio station. Taken in by the appeal of the Southern California film industry, Carlos founded his own production company in 1964. The company — “C. Tobalina Productions” — consisted of Carlos and his bookkeeper wife Maria. After five years as a struggling company with no output, Carlos filmed and released his debut feature. Infrasexum was a soft-core pornographic film featuring Carlos, his wife and a small stable of unknown actors. Carlos performed double duty, serving as director as well. Critics panned the film, calling it “downright weird” and citing a “production value that was close to zero.” Infrasexum found a small cult audience, but just after its release, Carlos was brought to court in the state of Colorado on obscenity charges. A trial ensued but the verdict was found in Carlos’s favor. Carlos then filed a counterclaim against the prosecution, including the mayor, state attorney general, and governor of Denver. After a screening in Alabama, a similar case was brought up. It, too, was dismissed. Carlos faced additional lawsuits into the 70s. He fought each one, invoking his First Amendment rights. The US Supreme Court eventually redefined its definition of “obscenity,” as a result, in part, of Carlos’s cases.

Carlos released a second, equally criticized, pornographic feature called Double Initiation. Despite poor reviews, Carlos’s film generated enough revenue that he was able to purchase two homes in the seaside California town of Pacific Palisades. His home, at 14930 Corona del Mar, served as his studio. The majority of his over forty sex exploitation films were shot at this location. Most of Carlos’s work was consistently berated as “nonsensical,” “confusing” and just “weird.”

In 1971, Carlos purchased the majestic Mayan Theatre in Los Angeles for $300,000. He used the one-time respected theatre as an exclusive outlet to screen his films. He later purchased two more theaters — the X Theater on Hollywood Boulevard and the Star Theater in La Puente, California. Carlos converted the X Theater into a twin screen facility, naming the two separate auditoriums “Adam” and “Eve.” The “Eve” side continued to screen Carlos’s pornography while the “Adam” featured mainstream films. The Star Theater was the last surviving lamella (curved wood) roof theater designed by master architect S. Charles Lee — until its demolition in 2019.

On March 31, 1989, Maria found Carlos in the rear patio of their home. A .38 caliber revolver lay on the ground next to him. There was a self-inflicted gunshot wound in his head. A discovered suicide note explained that Carlos had been diagnosed with terminal liver cancer. He was 64 years old.