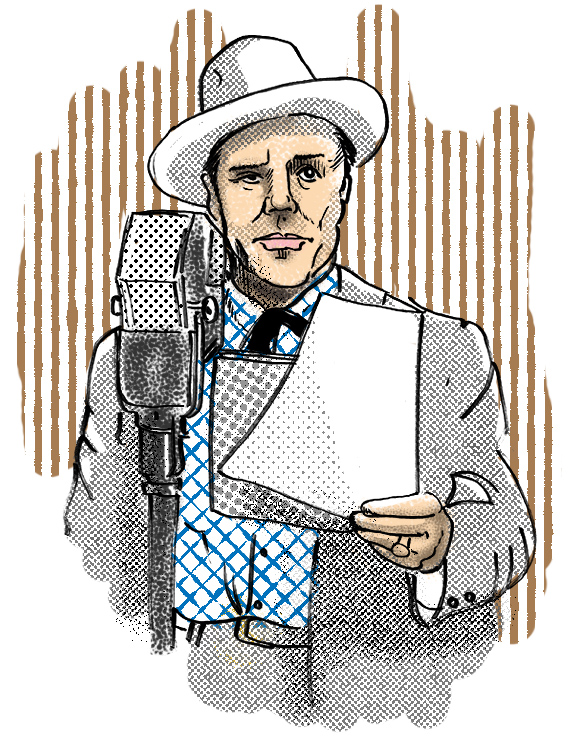 The child of vaudeville performers, Bill Thompson’s destiny was show business. At 21, he started singing and doing voices on The Breakfast Club, a popular national morning radio show originating in Chicago. He developed a slow-speaking, mush-mouth character he dubbed “Mr. Wimple.” Bill would nurture this voice for the rest of his career.

In 1936, Bill joined the cast of Fibber McGee and Molly, employing his roster of voices. He played a variety of characters, unknown to the listening audience that it was just one actor. Bill voiced boisterous conman “Horatio K. Boomer” (a parody of W.C. Fields), as well as “Nick Depopulis,” the Greek restaurant owner and “Wallace Wimple,” his mush-mouthed old favorite.

Animation whiz Tex Avery began to build a character around Bill’s distinctive voice. He created a sad-faced dog named “Droopy,” making his screen debut in 1943, although he was not given his official name until his fifth cartoon appearance. Droopy’s slow, lethargic demeanor was contrasted by his shrewd ability to outwit his adversaries and his Bill Thompson-provided voice was perfect for the character. His jowly greeting of “Hell-o all you happy people” became an instantly-imitated catchphrase.

Bill was soon in demand by other studios including Disney, where he provided the voice of “Mr. Smee,” Captain Hook’s loyal sidekick in Peter Pan, as well as “J. Audubon Woodlore,” the befuddled forest ranger bothered by goofy Humphrey Bear and a variety of characters in Lady and the Tramp. Disney loved Bill and cast his vocal skills for years. (My favorite is the beleaguered pet owner “Flannery” in Disney’s 1954 short Pigs is Pigs.)

Bill Hanna and Joe Barbera originally nabbed Bill for the role of Fred Flintstone, but recast Alan Reed before the series premiered. All of Bill’s lines were re-dubbed, although Bill delivered a single line in a Season One episode. Hanna and Barbera did use Bill’s talents in other animated shows, including Touché Turtle and Dum Dum.

After completing voice work for the 1970 Disney animated feature The Aristocats, Bill suffered septic shock and passed away a week after his 58th birthday.