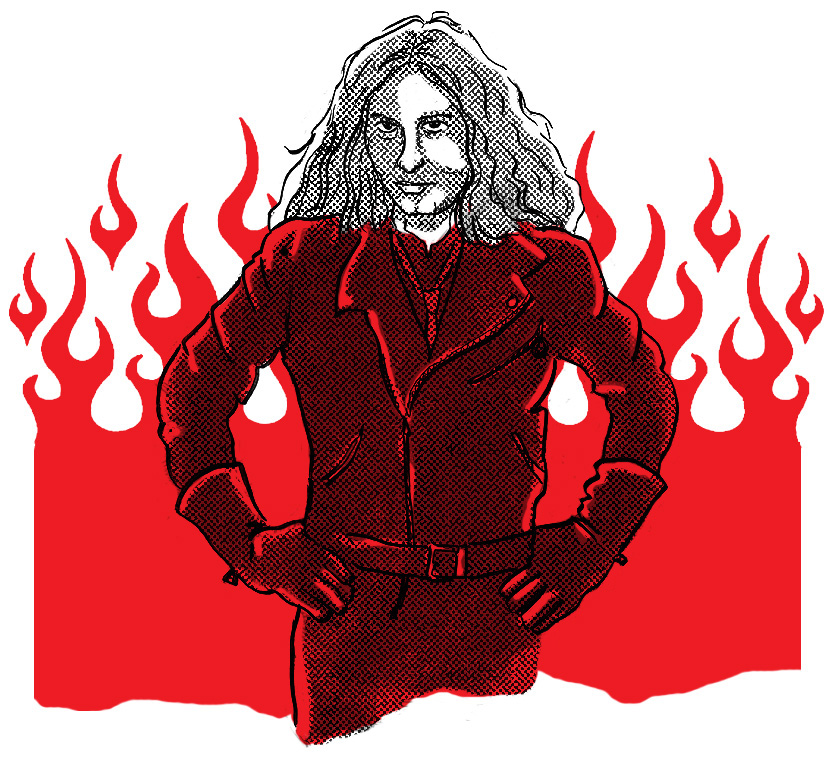 By the time I was a junior in high school, I had amassed a pretty sizeable record collection. I began my collection way back in elementary school, when I purchased my first album with my own money. As an eleven year-old, I proudly selected a copy of Carole King’s “Tapestry” from the “Best Sellers” section of a local Sam Goody record store. I watched Carole’s efforts be rewarded when she was honored by a windfall of Grammy Awards and constant play on AM radio. From that point forward, I was buying albums at a fairly regular clip. At any spare moment, I could be found thumbing thought the offerings at any one of a number of record stores near my house.

In 1978, while perusing the racks at the same Sam Goody where my record collection was born, I spotted an album cover that held me transfixed. I instantly recognized the artwork of Richard Corben, the celebrated artist whose impossibly-muscular males and impossibly-endowed females graced the pages of one of my favorite publications – Heavy Metal magazine (the American counterpart to the popular French magazine Métal hurlant). I had been reading Heavy Metal for about a year and Corben’s work was a particular favorite and inspiration. The album was entitled “Bat Out of Hell” and was credited to “Meat Loaf.” I didn’t know if that was a singer or the name of a band. I had never heard of Meat Loaf before I held this angry red album — depicting a dark and demonic figure on a motorcycle blasting through a cemetery from the depths of Hades in a hail of white hot flame — in my hands. But, this illustration was awesome. The music contained within must be just as cool to warrant such packaging, I thought. As I carried the album up to the cashier, I noticed an unusual line of text in thin white letters at the bottom of the front cover. It read “Songs by Jim Steinman.” I had only seen this appear on some of my parents’ Broadway soundtrack albums, where credit was given to non-performing folks like Oscar Hammerstein or Lorenz Hart for composing the songs. The only songwriting acknowledgment on any of the albums I owned were in tiny letters under the song tiles on the record label — and who reads those?

When I got home, I played “Bat Out of Hell” relentlessly! For weeks… even months! It was like nothing I owned. My mom hated it, requesting that I lower the volume on “that greaser music.” But, I just couldn’t! The intricate, word-heavy lyrics were punctuated by bombastic, layered musical arrangements featuring multiple guitars and keyboards (and tons of other musical instruments) as well as the occasional rough motorcycle engine and rapid-fire baseball play-by-play. It was magical and theatric and sexy and heartbreaking and rebellious — and funny. Yep… it was funny. It was meant to be funny. Jim Steinman — the guy who pompously got his name on the front cover of an album on which he doesn’t even sing — set out to write mini Wagnerian-style operettas for the rock and roll era… with his tongue planted firmly in his cheek. And – BOY! – did he succeed. “Bat Out of Hell” went on to become one of the best selling albums of all time. It still sells well today.

While planning an appropriate follow-up to the wildly successful “Bat Out of Hell,” Meat Loaf was sidelined with vocal chord problems, silencing the singer indefinitely. Jim felt bad for his friend and collaborator, but he felt worse for himself. Now, he had no-one to sing his album’s worth of equally-epic compositions. He decided to attempt the vocals himself. However, Jim was decidedly not a singer. Despite his previous experience of only contributing a few background vocals to a couple of songs on the “Bat Out of Hell” album, Jim was ready to record as a solo. He didn’t posses the power or range of Meat Loaf. As a matter of fact, his voice can be described as “thin” and “strained.” But, Jim was determined. He assembled the same band from “Bat Out of Hell,” including members of Todd Rundgren’s Utopia and members of Bruce Springsteen’s famed E Street Band. He recruited some of the backup singers from “Bat Out of Hell,” including Rory Dodd, who was moved front and center on several songs that Jim couldn’t quite handle. He even tapped Karla DeVito, Meat Loaf’s touring featured vocalist, to tackle the female counter vocal of the duet “Dance in My Pants” — a not-so-veiled homage to the hit “Paradise By the Dashboard Light.” The result of Jim’s drive and persistence was the menacing yet plaintive “Bad for Good,” a 1981 release with every bit of the passion and bravado — and humor — that made “Bat Out of Hell” an instant classic. From its sprawling, nine-minute opening track to its gut-wrenching closer “Left in the Dark” (later covered by Barbra Streisand), “Bad for Good” is the Jim Steinman magnum opus that you never heard of.

Jim went on to a very successful career, writing and producing songs for a wide variety of artists from Sisters of Mercy and Bonnie Tyler to Barry Manilow and Celine Dion. He wrote a long running musical that played for years in Europe, but did not fare as well in the United States. And he worked on and off with Meat Loaf — even duplicating their initial success sixteen years after the release of “Bat Out of Hell.”

After some earlier health issues, Jim Steinman passed away on April 19, 2021 from sudden kidney failure. He was 73.

“Bad for Good” remains one of my favorite albums.