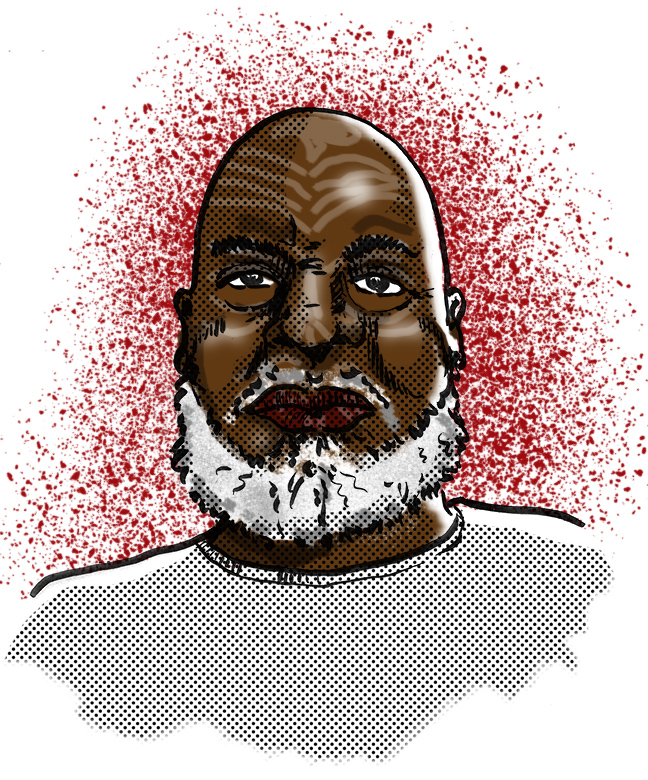 James Harris was born into hard times in 1950s Mississippi. His father was shot to death during a back alley craps game. Young James became a sharecropper to help support his family. Soon, he turned to petty burglary. Local police told him to leave town before big trouble came his way. James understood that when police told you “leave town,” you had better obey or you’ll wind up dead.

James moved to Florida where he picked fruit and drove trucks. His truck driving brought him to Michigan and a chance meeting with popular professional wrestler Bobo Brazil. James began training with Brazil’s friend “Tiny” Tim Hampton. The two continued their training sessions after a move to Arkansas to avoid the snowy Michigan weather.

James made his professional wrestling debut in 1978 as “Sugar Bear Harris.” He used several different pseudonyms before adopting the persona of a wildman from Africa named “Kamala,” complete with body painting (inspired by a Frank Frazetta illustration) and a backstory of being a bodyguard for the president of Uganda. As Kamala, James was encouraged to employ an unorthodox “brawling” style of wresting. He grew to become a popular character in the ring – the guy fans “loved to hate.” He eventually signed with the mighty WWE at the insistence of colleague Andre the Giant. Kamala stayed with the WWE for a short time, defeated in the ring by Andre the Giant in November 1984. He made sporadic reappearances with the organization over the next several years.

In 2011, James had his left leg amputated due to the effects of diabetes and hypertension. Less than six months later, his right leg was amputated, as well. He collected a small disability check and sold handmade furniture to make ends meet. In 2016, he was part of a class action suit filed against the WWE claiming that the company concealed the risks of brain injuries from wrestlers. The case was eventually dismissed with no liability placed on the WWE.

In 2017, James underwent life-saving surgery to remove fluid from his heart and lungs. He was placed on life-support and slowly recovered. However, in 2020, still in poor health, James succumbed to complications related to COVID-19. He was 70 years old.

My annual Christmas music compilation is available as a FREE DOWNLOAD at ge.tt for a limited time. This year, it’s a whopping 91 minutes of pure Christmas cacophony sure to ruin your holiday before your relatives do. Why not take the risk? After all, it’s free, so what have you got to lose? Hey, there may even be a song or two that you can actually tolerate. (No guarantees.)