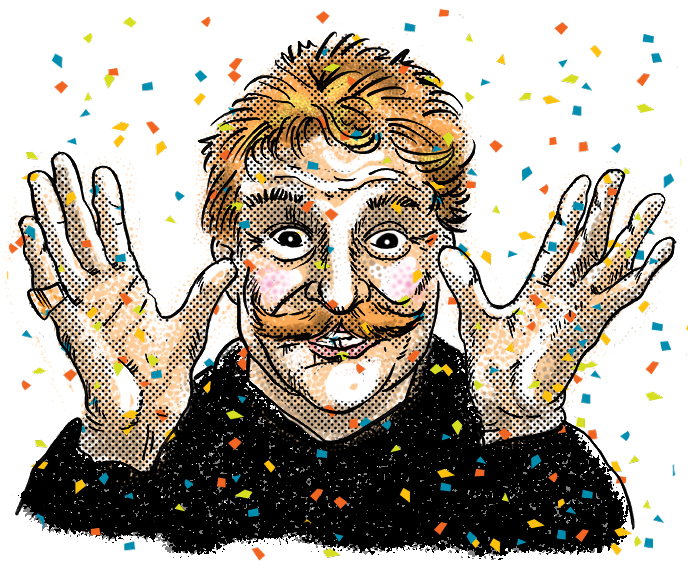 Rip Taylor was more than just a one-liner spewing, confetti-throwing, manic comedian. Sure, that’s what he was best known for, but there was more to his career than just that.

Rip longed to be a Las Vegas comedian and, after a debut on The Ed Sullivan Show in 1964, his wish came to fruition. He became a sought-after and very popular opening act in Sin City for such big names as Frank Sinatra and Ann- Margret. Once his popularity took off, Rip was appearing on various TV talk shows and variety shows. He even made a guest appearance on The Monkees in 1966. On Broadway, Rip took roles that showcased his singing talents, surprising audiences. He shone in musicals like Peter Pan, A Funny Thing Happened on the Way to the Forum, Anything Goes and Oliver!

Rip became a staple on game shows including Match Game and The Gong Show as well as hosting the Chuck Barris’ send-up The $1.98 Beauty Show. A favorite of producer Mark Goodson, his presence was requested by asking for “that crying comedian.” Later, he proved his dramatic prowess as Demi Moore’s boss in Indecent Proposal. Along the way, Rip lent his voice to a number of cartoons including The Jetsons and Duck Tales.

As a friend of entertainer Liberace, Rip was an advocate for AIDS-related charities and in 2005, served as Grand Marshal of the Washington, DC Capital Pride Parade. In 2009, Rip took exception when author Brent Hartinger referred to the comedian as “openly gay.” He sent an email stating: “You don’t know me to summarize I am openly gay. I don’t know you’re not an open heroin user. You see how that works? Think before you write.”

After a career that spanned six decades, the comedian who rightfully earned the nicknames “The Prince of Pandemonium,” “The Master of Mayhem” and “King of Camp and Confetti,” passed away in 2019 at the age of 88. His remains were cremated and sprinkled over Hawaii…. like confetti.