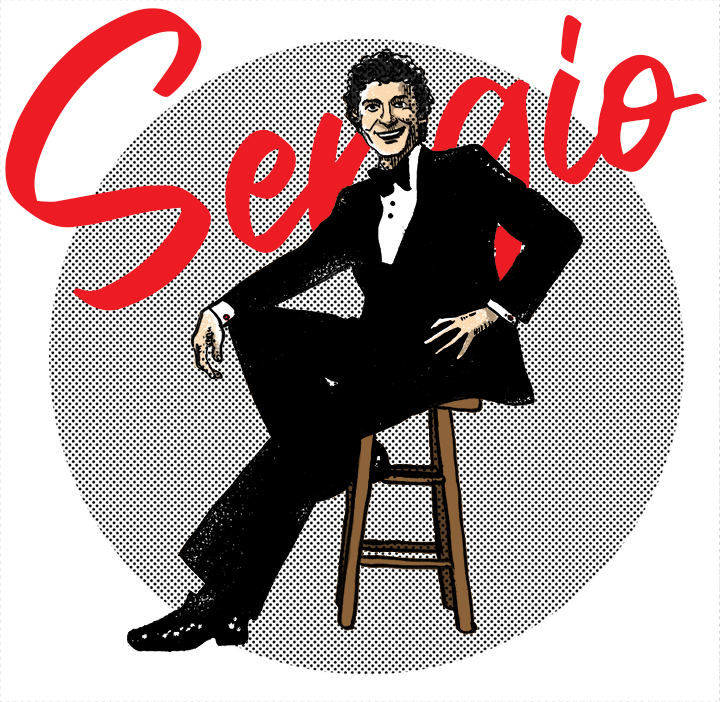 Sergio Franchi. What a melodic, romantic sounding name! It was very fitting for the Italian tenor with the robust voice and charming demeanor. Sergio Franchi! Throughout the 70s, he sang on The Ed Sullivan Show, filled the big showrooms in Las Vegas and toured the country, enchanting audiences that were mostly comprised of suburban American housewives looking to inject a little Continental excitement into their routine lives.

My mom was one of them.

My mom loved Sergio Franchi. As a teenager in the early 1940s, she was fan of big-band swing and was quite the accomplished jitterbugger. She swooned along with her contemporaries to the likes of Frank Sinatra and Eddie Fisher. She could be spotted at the famed Steel Pier in Atlantic City doing the Lindy or on the dance floor at Grossinger’s in the Catskill Mountains “cuttin’ a rug” with some guy whose name she barely knew. As long as there was music, my mom was there.

She always kept up with musical trends. She fell for Tom Jones in the 60s with his tight, high-waisted pants doing their best to contain his gyrating hips. She listened with heavy-lidded eyes to Bobby Darin and Mel Torme and Vic Damone. And then she discovered Sergio Franchi.

Sergio Franchi! Rugged, chiseled, Romanesque features. Barrel-chested and impeccably groomed — always sporting a simple and elegant tuxedo, its bow tie usually undone by song number three of his repertoire. In later years, Sergio would display a trendy perm on his previously close-cropped ‘do. His easy, but charismatic, personality and his wide smile entranced his audiences. And that voice! Magnificent, velvety tones that could handle popular tunes as easily as soaring operatic arias.

My mom never missed seeing Sergio Franchi at the Latin Casino when he came to our area. “The Latin,” as it was colloquially known, was a very popular night club that moved from its original Philadelphia location to a larger venue just over the New Jersey state line. Despite its name, The Latin Casino was not actually a casino, although it attracted the same caliber acts that played the real casinos in Las Vegas. Frank, Dean, Sammy — they all performed there on nationwide tours that stopped in and around the City of Brotherly Love. Ironically, its downfall was the introduction of casino gambling in Atlantic City, putting a clause in performer’s contracts not allowing them to appear with a certain radius of the seashore resort — a radius that included the Latin Casino. However, in its heyday, my mom would go with a girlfriend or her sister to see Sergio Franchi — but never with my father. He wasn’t interested in going anywhere — especially to see some singer who wasn’t Al Jolson. Good thing, too, because my mom was very uninhibited and I’m sure she offered her share of screams and cat-calls along with the other female members of the audience. One morning, after my mom had seen Sergio Franchi the night before, I came into our kitchen to find a red cloth napkin folded neatly on the kitchen table. My mom, with stars in her eyes, explained that Sergio had wiped his face with the napkin and handed it down to her at her stage-side table. It was as though the Lady of the Lake had touched Arthur’s shoulders with Excalibur. In later years, Serigo Franchi moved his Philadelphia area stop to the Valley Forge Music Fair, a smaller, in-the-round venue just minutes from where George Washington led troops fighting for our country’s independence. As far as my mom was concerned, they fought for her right to sit in the front row to see Sergio Franchi sing. In between songs, Sergio Franchi would address the audience, often remarking about the name of the town where the venue was located. “King of Prussia!,” he would say, his diminished, though still present Italian accent rolling the “R”. He’d gesture with his outstretched arm in a mock-majestic flourish as he repeated it “King of Prussia! I love to perform in King of Prussia, Pennsylvania!” He’d smile and the audience would giggle and sigh in unison, as though they had rehearsed. 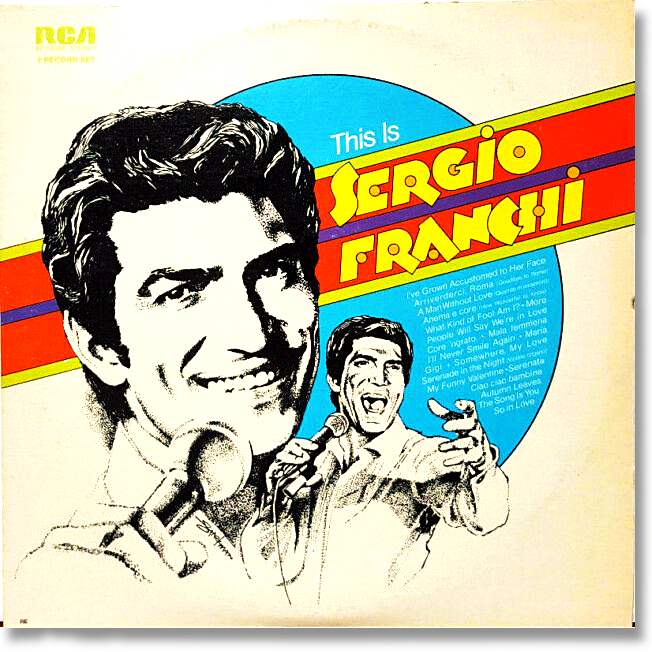 Surprisingly, my mom owned just one Sergio Franchi album… but she played it over and over and over again. It was a 1973 RCA Records compilation imaginatively titled This is Sergio Franchi. The cover showed two sketchy drawings of the singer — a close-up and a waist-up action pose — against a very generic 70s-style design and typeface. When she could gain control of the family stereo, she would blast This is Sergio Franchi the way my brother would crank the volume on Physical Graffiti. This is Sergio Franchi earned a place in our family’s all-inclusive record collection, even if it looked out of place among the many releases by Queen, Springsteen and Elton John. (Oh, my mom listened to those, too.)

Sergio Franchi appeared on the popular morning talk show Regis and Kathie Lee in 1989. It would prove to be his final TV appearance. Afterwards, during rehearsals for a show at South Shore Music Circus in Massachusetts, Sergio Franchi collapsed on stage. He was hospitalized and the remaining dates of his summer tour were canceled. Testing revealed a brain tumor and, despite treatments including radiation, Sergio passed away in May 1990 at the age of 64.

My mom, who was fighting her own battle with cancer, was crushed when she heard the news. When she returned home from her chemotherapy sessions, she played her copy of This is Sergio Franchi until the grooves in the vinyl wore flat.