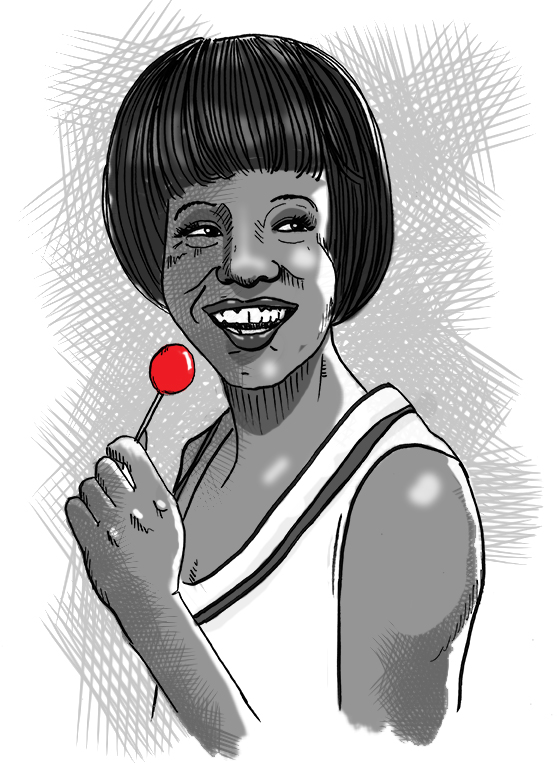 Twelve-year old Millie Small won the Vere Johns (the Jamaican Ted Mack) talent contest in her native Jamaica. She recorded a few songs that became hits on Jamaican radio. These songs made their way to Chris Blackwell, noted hitmaker and founder of Island Records, one of England’s biggest independent labels. Blackwell brought Millie to London where she began an extensive regimen of dance and diction training. Blackwell hand-picked the song “My Boy Lollipop,” a cover of a tune by The Cadillacs, to become Millie’s next single. Released in 1964, it shot to the top a many international charts, becoming the first ska influenced hit. It also became the first international hit for Island Record. Millie was tagged “The Blue Beat Girl,” for introducing a hybrid sound of rhythm & blues and reggae.

Millie appeared on a 1964 Beatles TV special. This led to bookings on numerous other music programs. She began a brief affair with Peter Asher of Peter & Gordon, a relationship she later denied. A surge of popularity of reggae insured more opportunities for Millie, but, sadly she found herself broke and destitute in the late 1980s. She disappeared from the public eye, even failing to appear at an awards ceremony in Jamaica where she was honored with a lifetime achievement presentation.

In 2012, Millie granted a rare interview with Goldmine Magazine, where she revealed that Rod Stewart played harmonica on “My Boy Lollipop” and that she received no royalties for the recording.