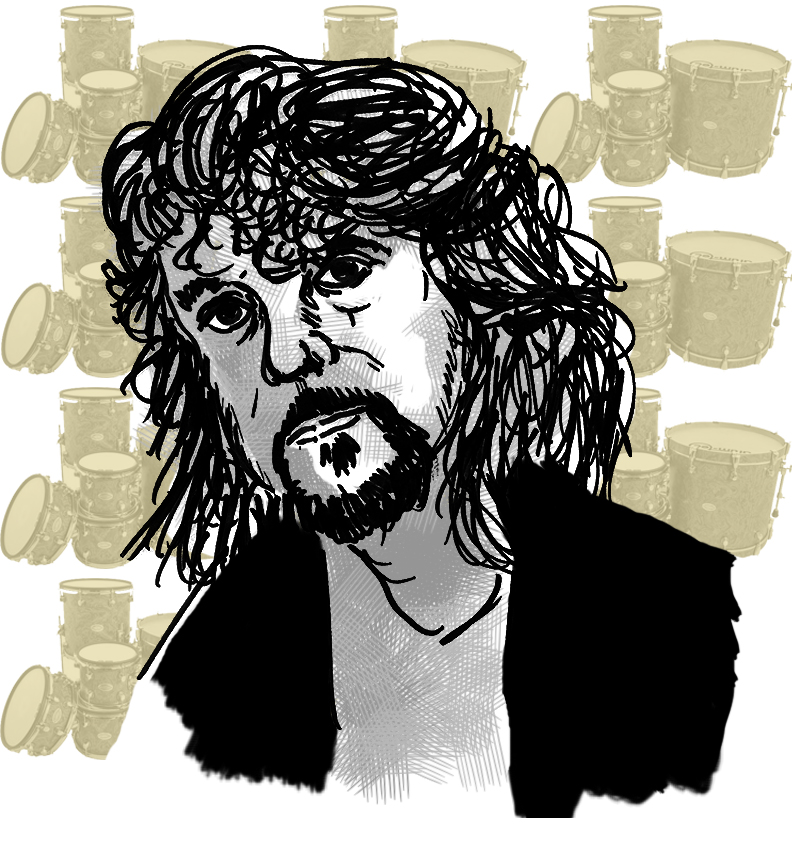 On November 20, 1973, The Who’s performance at San Francisco’s Cow Palace was briefly interrupted when Keith Moon passed out behind his drum kit. It seemed that the horse tranquilizers he had downed prior to the concert were too much for the drummer to handle. Moon was carried off by some roadies and the three remaining members — guitarist Pete Townshend, bassist John Entwistle and vocalist Roger Daltrey — soldiered on with the show. Daltrey banged on a tambourine as a impromptu substitute for drums on “See Me Feel Me.” At the song’s conclusion, Townshend thanked the crowd for the kind reception and apologized for Moon’s episode. Then he addressed the crowd, asking “Can anybody play the drums?” He repeated the question, adding forcefully, “I mean somebody good!”

Scot Halpin, who had just moved to the area from Iowa was in the front row with his friend Mike Danese. The pair had been outside the venue for thirteen hours, hoping to score good seats for the evening’s show. Mike began to wave his arms and point to Scot. “He can play!,” Mike yelled loud enough to attract the attention of concert promoter Bill Graham. In reality. While Scot was indeed a drummer, the reality was he had not played in over year. Graham didn’t wait for that explanation. He pointedly asked Scot, “Can you do it?” Scot answered “Yes.” Graham yanked Scot onto the stage, much to the surprise of Townshend and Daltrey. Scot was shown a seat behind the massive drum kit and given a shot of brandy to calm his nerves. The crowd cheered and Townshend instructed Scot. “I’m going to lead you. I’m going to cue you.,” the lanky guitarist said.

Roger Daltrey announced “Scott!” into the microphone and Townshend launched into the opening riff of “Smokestack Lightning,” the Howlin’ Wolf blues song. Scot managed to keep up a good rhythm with Townshend and Entwistle, but stumbled a bit when the song segued into the Willie Dixon rave “Spoonful.” He began to falter on the Who original “Naked Eye,” the final song of the night. Scot was brought to the front of the stage to take bows with the rest of the band. He was ushered backstage where he was thanked and given a Who tour satin jacket… which was stolen later in the evening.

Scot left California in 1995, moving to Indiana. He passed away from an inoperable brain tumor in 2008. He was 54 years old.