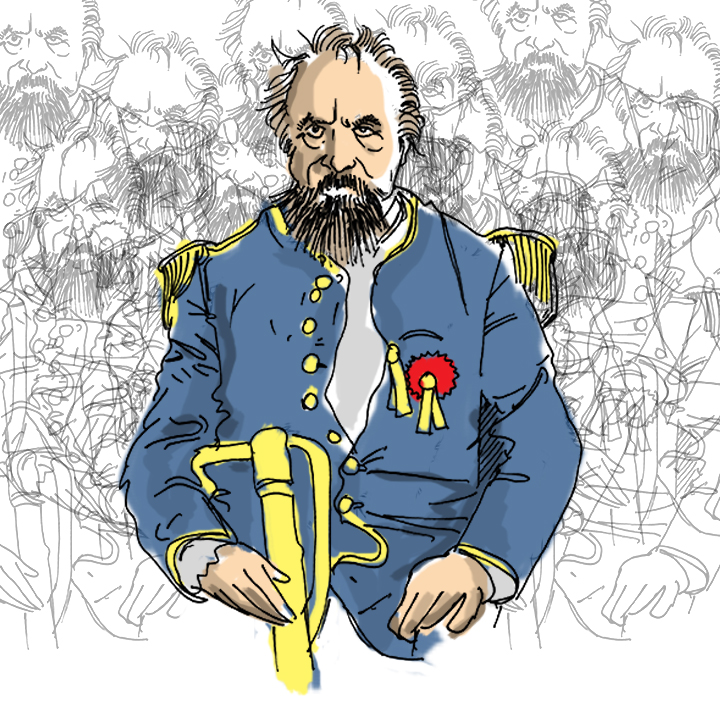 Joshua Norton came to the United States during the Gold Rush of 1849. He landed in San Francisco and dove headfirst into the real estate business. He was successful at first, but he got greedy. He hatched a plan to take advantage of a rice shortage in 1853. However, when huge shipments of the grain arrived in San Francisco, prices plummeted and Joshua Norton was financially ruined. He disappeared for several years until he showed up at the offices of the San Francisco Bulletin one day in 1859. With a royal decree in his hand, Joshua proclaimed himself “Emperor Norton I of the United States.”

The new and “exalted” Emperor Norton would parade daily through the streets of San Francisco. He was met with bows and revered greetings from the citizens, who got a kick out of playing along with the charade. The newspapers took great pleasure in publishing Emperor Norton’s decrees, including a proclamation dissolving the United States and naming himself sole monarch, all while the country was teetering on the brink of the Civil War. When the French invaded south of the border, Norton added “Protector of Mexico” to his title.

Emperor Norton’s popularity grew. He was adopted as a sort of mascot for the city of San Francisco, despite his lack of formal governmental power. Emperor Norton dolls were sold in shops across the city. Theater owners saved him a seat at the opening night of every play. Train and ferry companies let him ride free of charge. Some of the city’s restaurant allowed him to dine free of change in exchange for the right to post an imperial seal of approval that read: “By Appointment to His Imperial Majesty, Norton I.” He still remained poor, but people would offer him alms under the guise of “paying their royal taxes.” Army officers supplied him with a replacement when his trademark epaulet-clad uniform began to get shabby. One of the most famous mandates came in the early 1870s, when Emperor Norton announced that the city should appropriate funds for construction of a bridge between San Francisco and Oakland. Ignored initially, Norton I’s decree eventually came to fruition in 1936 with the opening of the Bay Bridge. Emperor Norton was immortalized by author Mark Twain in the novel “The Adventures of Huckleberry Finn,” as the inspiration for the eccentric character “The King.”

Just after the publication of this blog post, I was contacted by the Emperor’s Bridge Campaign, an online entity devoted (in their words) “to honor the life and advance the legacy of Emperor Norton.” They asked for permission to include my illustration among the other illustrations appearing in their online gallery, some dating back to the 19th Century. I happily gave them my blessing. You can see my illustration in good company here.  Actually you can see my illustration at the top of this page, but there are some other pretty good ones here too.