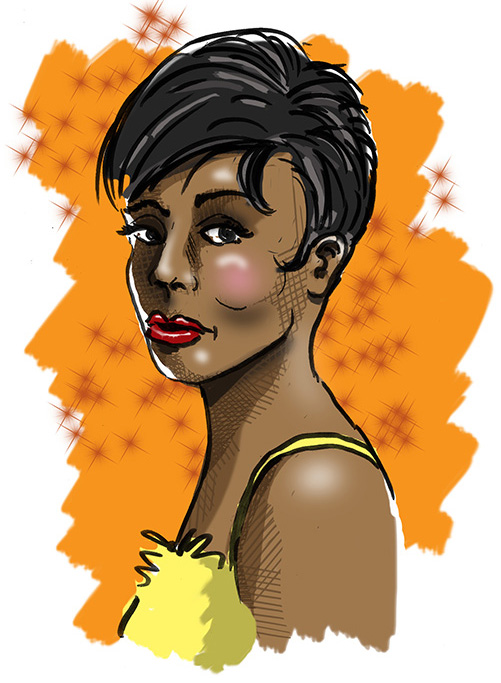 I drew this picture to give to Diahann Carroll when I met her at the Mid-Atlantic Nostalgia Convention in 2018. She was among a group of celebrity guests that were attending the show to meet fans and sign autographs. I had been collecting autographed photos of “celebrities” for almost thirty years before stopping in 2017. The prices had gotten too out of hand and those claiming “celebrity” status became questionable.

Diahann Carroll, however, was a bonafide celebrity. She was a Tony Award-winning and Oscar-nominated actress with a long and successful career. She is best remembered, of course, as “Julia Baker,” the title character in a groundbreaking NBC sitcom. Diahann was the first African-American actress to have her own show in a non-servant role. The show was very successful for Diahann. She later appeared in a regular role on the nighttime soap opera “Dynasty” as a rival to Joan Collins’s “Alexis Carrington.”

At the convention, Diahann was seated behind a table covered with glossy photos highlighting her illustrious career. I approached her table. At 83, she was still the glamorous star I recalled from my youth. I handed her a print of my drawing and told her that I was a big fan. She looked at the print and said, “Oh, remember those short hair styles?” Then she offered a half-hearted smile. realizing that I was not going to purchase an autograph. I was not offended. She was there to make a little unreported income.

Diahann Carroll passed away on October 4 at the age of 84.