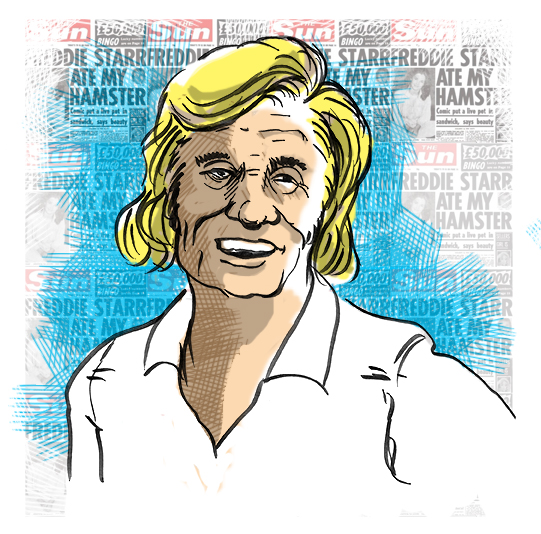 Freddie Starr, leading his Mersey Beat group The Midnighters, set out for fame in the early 60s. Despite being represented by Beatles manager Brian Epstein and having singles produced by music impresario Joe Meek, Freddie could not catch a break. It wasn’t until an appearance on the British talent show Opportunity Knocks that Freddie’s popularity took off.

Freddie hosted his own BBC show and performed in nightclubs all over England. His impressions of Mick Jagger and Elvis Presley had audiences rolling in the aisles. But, thanks to a little manipulative publicity, Freddie would become infamous.

On March 13, 1986, The Sun, the British equivalent of the National Enquirer, splashed this headline across its front page: “Freddie Starr Ate My Hamster.” According to the story, Freddie had been staying at the home of his friend Vince McCaffrey and his 23-year-old girlfriend Lea LaSalle.  Freddie had returned to his friend’s apartment following a performance at a Manchester nightclub in the early hours of the morning. He demanded that Lea LaSalle make him a sandwich. When she refused, he allegedly went into the kitchen and put her pet hamster between two slices of bread and proceeded to eat it. The story was made up by Freddie’s publicist as a joke, but it took on a life of its own. It had an unusual effect on Freddie’s career. The story seemed to boost the demand for tickets for his live performances. Freddie, of course, denied the incident, stating, “I have never eaten or even nibbled a live hamster, gerbil, guinea pig, mouse, shrew, vole or any other small mammal.” The story followed Freddie for the rest of his life.

Freddie passed away on May 9, 2019 at the age of 76. The Sun followed suit and headlined his obituary with: “Freddie Starr Joins His Hamster.”