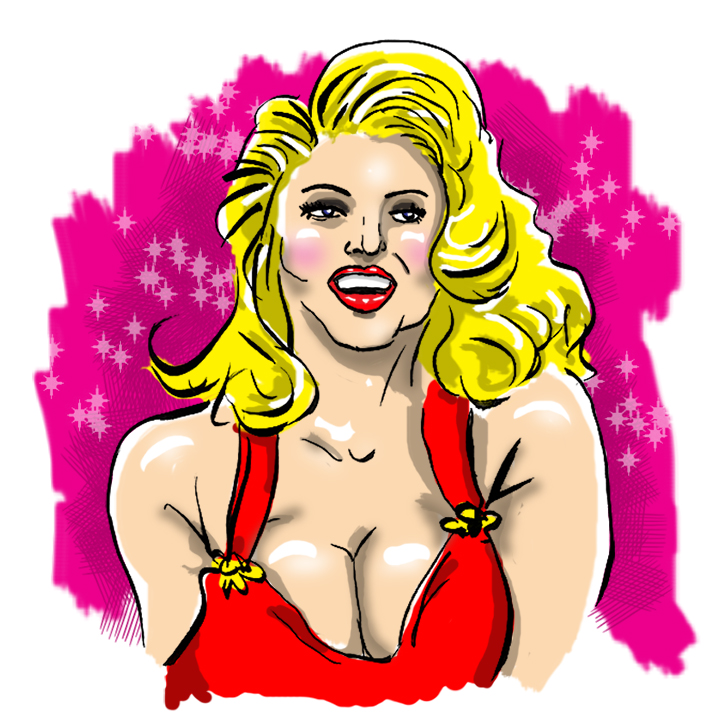 Vickie Hogan was born in Houston, Texas, but was shuffled around with a family of half siblings, the result of several of her mother’s relationships. Vickie was briefly raised by an aunt until she was reunited with her estranged mother. Vickie was soon known as “Nikki Hart,” choosing a new first name and pairing it with her new stepfather’s surname.  A poor student, she failed her freshman year of high school and dropped out soon after. In 1985, the 18-year-old was working at Jim’s Fried Chicken Restaurant in Mexia, Texas when she married Billy Smith, a cook at the same restaurant.

In 1992, now calling herself “Vickie Smith,” she appeared on the cover of Playboy magazine and was featured in the centerfold of the May issue. As a result, Vickie, now calling herself “Anna Nicole Smith,” was signed as the replacement for supermodel Claudia Schiffer as the “face” of Guess Jeans. Photographers exploited Anna Nicole’s resemblance to 50s movie bombshell Jayne Mansfield and shot her in similar poses made famous by the late screen siren. Giant billboards of Anna Nicole’s provocative ads for Guess were plastered everywhere and full page ads graced the pages of the most popular fashion magazines. She soon became an international representative for H & M stores, appearing in oversized outdoor ads in Norway and Sweden.

In 1994, at the height of her modeling career, New York magazine ran a story about “white trash” in America. A candid, unflattering shot of Anna Nicole appeared on the magazine’s cover. In the photo, a smirking Anna Nicole is seen in a short skirt with a bag of Cheez Doodles between her spread legs. Through legal representation, Anna Nicole sued the magazine for five million dollars, claiming unauthorized use of the photo. New York claimed that it was one of dozens of photos shot specifically for the cover. “I guess she just didn’t like the one we chose.,” stated the editor. The case was settled out of court.

In 1991, while working as a stripper, Anna Nicole met 89 year-old oil tycoon J. Howard Marshall, whose net worth was over one billion dollars. After a quick divorce from Billy Smith, 26 year-old Anna Nicole married the octogenarian Marshall. She never lived with her new husband and rarely kissed him, but, nevertheless, claimed that she loved him. Thirteen months after the marriage, Marshall died and Anna Nicole assumed she had just inherited a fortune. Marshall’s grown children, specifically E. Pierce Marshall, disputed her claim to half of Marshall’s estate. After a decade long battle, during which Anna Nicole filed bankruptcy, awards were granted and rescinded and Marshall’s son passed away, a final decision was still never reached.

Anna Nicole enjoyed a brief foray into movies and television. She appeared in a popular E! Network reality show that focused on her outrageous behavior and her personal relationships. After two seasons, America grew bored with her over-the-top antics and the series was canceled.

Anna Nicole gave birth to a daughter, sparking a tabloid controversy over the the identity of the father. Everyone from a photographer  to her attorney to Zsa Zsa Gabor’s husband claimed to have fathered the child. While visiting Anna Nicole in the hospital, her 20 year-old son Daniel died in her room. It was determined the caused was a lethal combination of various drugs.

Anna Nicole herself was addicted to painkillers and she was allegedly receiving rehabilitation treatment. On February 8, 2007, Smith was found dead in Room 607 at the Seminole Hard Rock Hotel and Casino in Hollywood, Florida. Emergency personnel were unsuccessful, despite their quick response. The cause of death was attributed to the huge amount of many different prescription drugs, most of which were prescribed to her attorney. Anna Nicole was 39 year-old. Legal battles delayed her burial and, due to the lack of embalming and some of the drugs in her system, her body began to decompose at a faster-than-normal pace. She was finally buried at a cemetery in The Bahamas, one month after her death.

A 2014 ruling denied a request from Anna Nicole Smith’s estate to sanction the estate of E. Pierce Marshall.