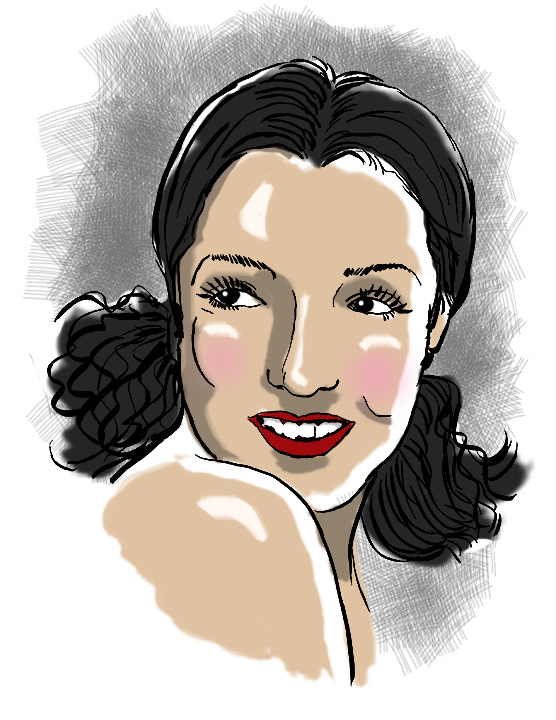 Lupe Velez got her show business start singing and dancing in Mexican vaudeville in the 1920s. She was recommended to American theater director Richard Bennett (father of actress Joan Bennett) by a friend who had seen her perform. Bennett needed an actress to play a Mexican cantina singer for a play he was staging and Lupe fit the bill. While in Los Angeles, when the play was produced, Lupe met comedian Fanny Brice. Lupe was fascinated by Fanny’s personality and the feeling was mutual. Through Fanny’s show biz connections, she was set up with a screen test and was soon cast in a small role in a Laurel and Hardy comedy. That led to a role opposite Hollywood heartthrob Douglas Fairbanks. Soon, Lupe was starring in a succession of pre-Hays Code films in the 1930s.

Lupe took a break from motion pictures to appear in Broadway impresario Florenz Ziegfeld‘s musical Hot Cha. She eventually returned to Hollywood with the popular B-picture The Girl for Mexico, the first in a series of vehicles for Lupe, now dubbed “The Mexican Spitfire.” She rocketed to fame and her “spitfire” screen persona spilled into her real life. She was temperamental, feisty and outspoken. She appeared a boxing matches, screaming at the fighters from ringside. Her Hot Cha co-star Bert Lahr told stories of Lupe rehearsing in the nude and she allegedly danced at parties sans underwear. She had many high-profile romantic partners, including Tom Mix, Charlie Chaplin and Clark Gable. However, Lupe reportedly threatened one lover, actor Gary Cooper, with a knife. She publicly insulted her contemporaries Delores Del Rio and Marlene Dietrich. Lupe married big-screen “Tarzan,” Olympic swimmer Johnny Weissmuller, but their tumultuous relationship lasted less than six years.

In November 1944, Lupe became pregnant by struggling actor Harald Ramond. She announced their engagement, but, on December 10, she broke the engagement and kicked Ramond out of her house. On December 13, 1944, after dining with two friends, Lupe went to her bedroom and took 75 Seconal pills, downing them with a glass of brandy. The next morning, her secretary found her dead on her bed. Beside her body was a suicide note addressed to Harlad Ramond.

Fifteen years after her death, filmmaker/author Kenneth Anger told a different account in his exploitation tome Hollywood Babylon. Anger falsely claimed that Lupe consumed over five hundred pills and, when her stomach rejected them, drowned with her face in the toilet, trying to vomit. The incident, which has been debunked many times over, unfortunately still remains firmly attached as the ending to Lupe Vélez’s life.