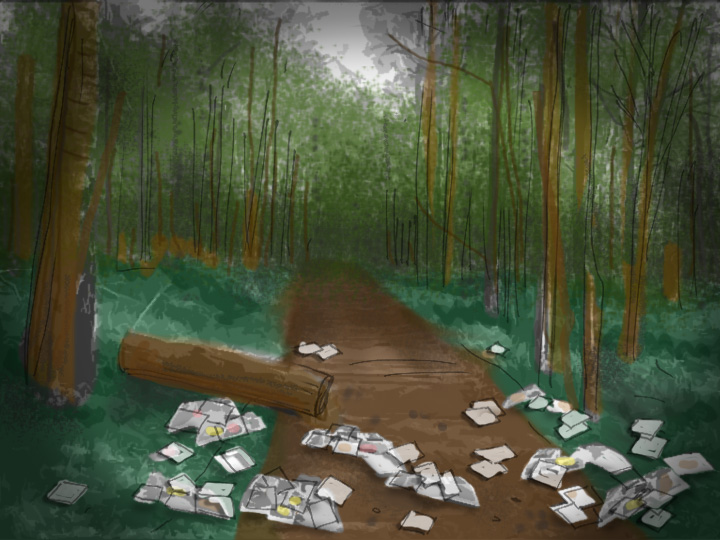 Its numerous jug handles and laws prohibiting self-serve gas pumping aside, New Jersey is, admittedly, a pretty weird place. One of the more mysterious things to happen in New Jersey occurred, quite fittingly, on Shades of Death Road in Warren County.

Shades of Death Road is a stretch of two-lane highway that runs approximately north and south for seven miles, skirting Jenny Jump State Forest at several points. The road, once known as Shades Road, offers several unsubstantiated origins for its current name. Folklore points to the road being a favorite of local highwaymen who robbed and murdered travelers. Other stories claim, due to its abundance of trees with low branches, that many lynchings took place there. In the early 20th century, the road was the site of several brutal murders, including a woman who killed and dismembered her unfaithful husband, burying his head and body on opposite sides of the road. Another story alleges that nearby Bear Swamp was overrun with malaria-carrying mosquitoes. The high death rate and the remoteness from medical assistance prompted local government to drain the swamp in 1884. In addition, the area has been host to alleged sightings of an other-worldly nature. Whatever the real reason for the macabre moniker, the local authorities have had difficulty in keeping souvenir-seekers from stealing the street signs. They have resorted to slathering the sign posts with grease to deter such theft.

In 1990, the magazine Weird NJ reported on the discovery of hundreds of Polaroid photographs strewn all over a clearing, just off Shades of Death Road. The photos (some of which can be seen here), mostly faded and out of focus, depicted a woman in various states of physical restraint. In some photos, she was shown tied to a metal table. Others were fuzzy close-ups of her face exhibiting distress and fear. In the background of the photos was an old television with dials, its screen filled with electronic snow. In others, the screen shows a broadcast of the action TV series Wonder Woman. Weird NJ said that local police were notified of the discovery by an anonymous tip, but the majority of the pictures had disappeared by the time police arrived, leaving little upon which to base an investigation.

Warnings against trespassing have been posted in some sections of Shades of Death Road, as parts run along private property. However, the public areas are open to the curious. But, please, don’t steal the street signs.