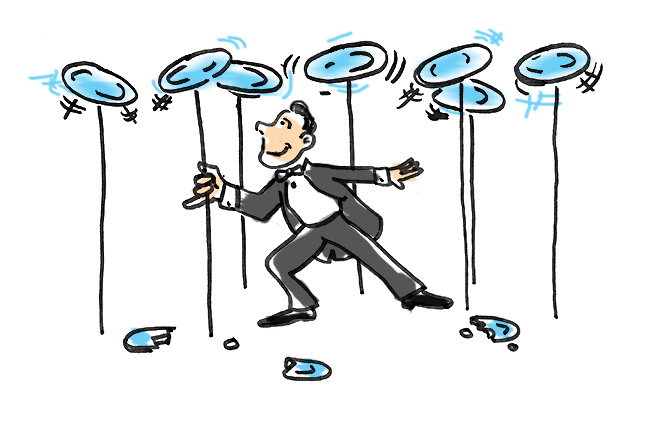 I remember watching this guy on The Ed Sullivan Show when I was a kid. Wedged in a slot somewhere between Buddy Hackett and Jerry Vale, this guy came out onto a stage that was already set up with a series of tall sticks and a long table piled high with colorful plates. Looking dapper in a tuxedo, he’d smile and gesture to the audience. Then, he’d grab a stack of plates. With several plates tucked under his arm, he’d position a platter atop one of the slender wooden rods and give that disk a spin. He’d whack the side to really get it going. Then, he’d put another plate on another stick and get that one a-spinning. Soon, the stage was alive with dozens of plates spinning precariously — impossibly! — high on the tips of thin wooden sticks. One or two would slow and wobble until the guy ran to it and jiggled the stick to get a full spin going again. Sometimes, he couldn’t get to a plate quickly enough and it would come crashing to the floor — sending shards of plate in all directions. At the end of his allotted five minutes, he’d have all the plates spinning merrily and he was rewarded with thunderous applause. Soon, he and his amusing little stunt were forgotten in favor of Sergio Franchi or Robert Goulet.