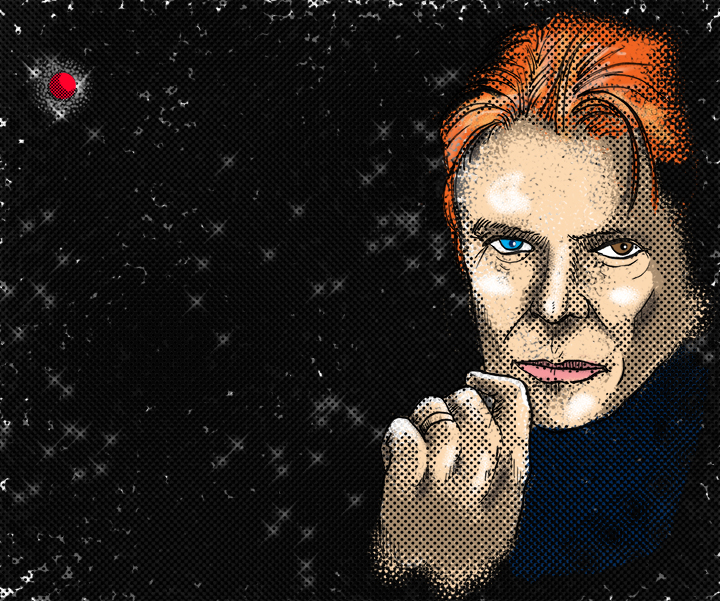 In 1975, I entered high school as a rambunctious, unwieldy fourteen year-old. After rattling the nerves of most of my teachers, I was quickly dismissed and sent to the only class that could keep me under control — art.  The art class to which I was relegated was a senior class. I was the lone freshman. I didn’t know any of my classmates and, frankly, they didn’t want to know me. So, I sat quietly at a desk, happily drawing my silly little pictures and just as happily keeping to myself.

Among the students in the class was a girl named Denise. And Denise was a dead ringer for David Bowie. I mean she looked exactly like David Bowie — flaming red-orange hair, tweezed eyebrows, pronounced cheekbones. She wore a “Bowie” emblazoned T-shirt nearly every day. On the days too cold for a lightweight cotton top, she sported some glittery, sequin-y garment, reminiscent of a Bowie stage get-up and accessorized with a Bowie pin-back button. While she busied herself with her art project du jour, she talked about one subject and one subject only  — David Bowie. Every aspect of every one of her conversations found its way back to the statuesque glam-rocker. His songs, his album titles, his elaborate stage costumes  — every topic had a David Bowie spin. Of course, her artwork consisted of beautifully executed copies of photos of David Bowie from various issues of Circus and Creem magazines, many of which were regularly carried and produced from Denise’s backpack.

In early 1976, Bowie brought his Station to Station Tour to Philadelphia and the months and days leading up to the performance were like Denise’s birthday. She talked about what songs he would play, what costumes he would wear and where she would sit on each night of the two-show stop. She planned her strategy for a rendezvous at his hotel and, perhaps another at the artist’s entrance at the concert venue. Denise was more devoted to Bowie than Peter was to Jesus.

Denise graduated in June 1976 and I never saw her again.

David Bowie passed away this week at the age of 69, after a private battle with cancer. I’m sure, somewhere, Denise is sad.